Glimpses into a Heart Filled with Devotion and Compassion

Glimpses into a Heart Filled with Devotion and Compassion

In his “Prayer to the Lotus Feet of Krishna,” Srila Prabhupada reveals his devotional longing as he voyages to America.

A meditation on Srila Prabhupada’s song written in 1965 on board the ship Jaladuta in the Atlantic Ocean, bound for America. 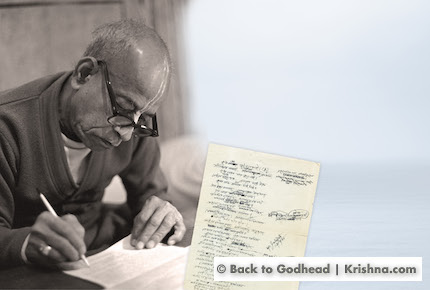 Our heart is filled with whatever we love the most. As pure devotees love the Lord the most, we understand that their heart is filled with love for Krishna. Yet it remains an esoteric mystery how that love fills and floods their heart, inspiring them to give themselves completely to the Lord, putting aside all other considerations. The more we understand the workings of their heart, the more we can get the inspiration and direction to make our heart work similarly, even if gradually and incrementally.

We get glimpses into the heart of others by their words, especially those spoken from the heart. While all candid words can reveal the heart, poems and songs have a distinct, even unique, potency to express the heart. In the song “Prayer to the Lotus Feet of Krishna,”* we get an intimate picture of the heart of Srila Prabhupada, that great devotee who spread love for Krishna all over the world, something never done before. What increases the impact of this poetic outpouring is the setting where it was composed: on the ship taking him on a turbulent month-long trip to the coast of America, the land the world considered the most prosperous, the land he saw as spiritually bankrupt, the land he hoped would begin the fulfillment of his vision for the globalization of devotion. Guided by what we know of Srila Prabhupada through his words, his life, and the tradition he represented, let’s peek into his thoughts while he was all alone, without money or institutional support, in an elderly body battered by two heart attacks.

“I emphatically say to you, O brothers, you will obtain your good fortune from the Supreme Lord Krishna only when Srimati Radharani becomes pleased with you.”

The refrain goes to the heart of the tradition that Srila Prabhupada belonged to and longed to share throughout the world: the Gaudiya Vaishnava tradition. He succinctly summarizes three core truths of the tradition:

Just as the planets revolve around the sun, the consciousness of a Gaudiya Vaishnava revolves around these core truths, as is symbolized by Prabhupada’s choosing this verse as the refrain, and thus sung repeatedly.

“Sri Srimad Bhaktisiddhanta Sarasvati Thakura, who is very dear to Lord Gauranga [Chaitanya Mahaprabhu], the son of Mother Shaci, is unparalleled in his service to the Supreme Lord Sri Krishna. He is that great saintly spiritual master who bestows intense devotion to Krishna at different places throughout the world.”

Though Prabhupada was physically alone in his mission, he never felt lonely because he knew that a glorious lineage backed him. His very first verse reveals his awareness of and appreciation for the one whose instruction impelled him on his improbable, if not impossible, mission: his spiritual master, Bhaktisiddhanta Sarasvati Thakura. He glorifies his guru for being intimately connected, through love and service, with the founder of their tradition, Lord Chaitanya, who is the combined manifestation of the divine couple Radha-Krishna. His vision of his guru is futuristic: though his guru’s attempts to spread bhakti globally had met only moderate success till then, Prabhupada glorifies him as the potent global spreader of devotion, thus expressing his confidence about the unfolding of a future that was still largely invisible.

“By [Bhaktisiddhanta Sarasvati Thakura’s] strong desire, the holy name of Lord Gauranga will spread throughout all the countries of the western world. In all the cities, towns, and villages on the earth, from all the oceans, seas, rivers, and streams, everyone will chant the holy name of Krishna.”

The second verse highlights what differentiates devotees from nondevotees: the direction of their desire. Whereas nondevotees desire things for themselves, devotees long to love the Lord and to inspire everyone to love the Lord. The more advanced a devotee, the stronger are his or her devotionally directed desires. Here Prabhupada expresses his faith in the strength of his guru’s divine desire, seeing it as the fuel that will power the global spreading of devotion. His mention of the chanting of the holy names worldwide points to the prophecy that Lord Chaitanya made, a prophecy that had been deemed nonliteral by many in Prabhupada’s own tradition for nearly five centuries, a prophecy he believed would soon be translated into reality.

“As the vast mercy of Sri Chaitanya Mahaprabhu conquers all directions, a flood of transcendental ecstasy will certainly cover the land. When all the sinful, miserable living entities become happy, the Vaishnavas’ desire is then fulfilled.”

In the third verse, Srila Prabhupada states the rationale for a devotee’s deep aspiration for a world filled with devotion: the rationale is conviction and compassion. Conviction that people’s distresses, whatever their specific causes or forms, arise ultimately from disconnection with the source and Lord of everyone. And compassion that reconnecting devotionally with the one Lord of all traditions, the Lord whom he knows as Krishna and Chaitanya, will not only free them from misery, but also flood them with ecstasy. If the vision of global devotion seems unrealistic, he points to the mercy of Lord Chaitanya, mercy that his tradition often glorifies as capable of making the impossible possible, such as infusing the dumb with eloquence and empowering the crippled to scale mountains.

“Although my Guru Maharaja ordered me to accomplish this mission, I am not worthy or fit to do it. I am very fallen and insignificant. Therefore, O Lord, now I am begging for Your mercy so that I may become worthy, for You are the wisest and most experienced of all.”

This verse reveals the disarming blend of humility and confidence that reigns in a devotee’s heart. Humility because Srila Prabhpuada considers himself utterly unworthy for such a glorious mission of devotion. And confidence that the mercy coming from his Lord and his guru will make him capable, providing him what he lacks, in this case wisdom, specifically the wisdom to inspire lifelong devotion to a Lord on a continent where most people haven’t even heard the name of that Lord.

“If You bestow Your power, by serving the spiritual master one attains the Absolute Truth – one’s life becomes successful. If that service is obtained, then one becomes happy and gets Your association due to good fortune.”

This verse shifts Srila Prabhupada’s vision from the success he seeks in the world to the success he seeks in his own heart, with both successes being made possible by the Lord’s mercy. A disciple empowered by the Lord can tangibly serve the guru’s desire, thereby making substantial contributions in the outer world. And through such service, the disciple attains inner contentment, a contentment that comes from and takes one closer to the Lord whose association is the devotee’s ultimate longing.

(As stated by Prahlada Maharaja to Lord Nrisimhadeva in the Srimad-Bhagavatam, 7.9.28:)

“My dear Lord, O Supreme Personality of Godhead, because of my association with material desires, one after another, I was gradually falling into a blind well full of snakes, following the general populace. But Your servant Narada Muni kindly accepted me as his disciple and instructed me how to achieve this transcendental position. Therefore, my first duty is to serve him. How could I leave his service?”

Expressing his deep gratitude to his guru for having given him the opportunity to serve, Prabhupada here seamlessly transits from expressing his own heart to quoting the expression of the heart of one of the tradition’s paradigmatic devotees: the boy-saint Prahlada. Following his Gaudiya teachers’ penchant to weave Sanskrit verses into Bengali compositions, Prabhupada repeats Prahlada’s complete commitment to the service of the guru, service that can save each of us from the dark destiny that awaits us by birth in this deluding and degrading world.

“O Lord Krishna, You are my eternal companion. Forgetting You, I have suffered the kicks of maya birth after birth. If today the chance to meet You occurs again, then I will surely be able to rejoin You.”

Continuing with the theme of how service to one’s guru externally leads to union with the Lord internally, Prabhupada here articulates our existential predicament: disconnection from the Lord subjects us to the world’s temptations and tribulations. And he seeks the transcendental solution: the mercy that comes by serving one’s guru, the mercy that gives captivating glimpses of the indwelling Lord, the mercy that propels us to unite forever with Him.

“O dear friend, in Your company I will experience great joy once again. In the early morning I will wander about the cowherd pastures and fields. Running and frolicking in the many forests of Vraja, I will roll on the ground in spiritual ecstasy. Oh when will that day be mine?”

Here Prabhupada shares a riveting glimpse of his own heart’s intimate aspiration. Though his body is on a ship that is going far away from the sacred land of Vrindavan, his heart is forever longing to go to Vrindavan, not just the terrestrial village in India, but the transcendental pastoral paradise that exists at the highest strata of spiritual reality. Prabhupada longs to be with Krishna, joining the pastimes where devotees delight with the Lord, enraptured by His beauty, captivated by His personality, oblivious of His divinity.

“Today that remembrance of You came to me in a very nice way. Because I have a great longing, I called to You. I am Your eternal servant, and therefore I desire Your association so much. O Lord Krishna, except for You there is no other means of success.”

The song concludes with appreciation of the remembrance of the Lord, remembrance that is the sustenance of the devoted heart. Because devotees love Krishna, they naturally and regularly think of Him. Yet sometimes a special memory arises spontaneously, suffusing and surcharging their heart with ineffable joy. Prabhupada reveals that he had such a sublime spiritual experience – a revelation that leads to the rearticulation of the truths that defined his life: He lives for Krishna, seeking to fulfill the Lord’s desire; he lives in Krishna, being nurtured by remembering the Lord; he lives through Krishna, seeking His mercy that will shelter him and power him to success, externally and internally.

*The song in the original Bengali can be found here: https://iskcondesiretree.com/page/krsna-tava-punya-habe-bhai