While Ravana coldly discarded the fallen soldiers in his army, Lord Rama cherished the sacrifices of His monkey warriors.

A lesson drawn from the contrasting relationships of Rama and Ravana with their respective soldiers. 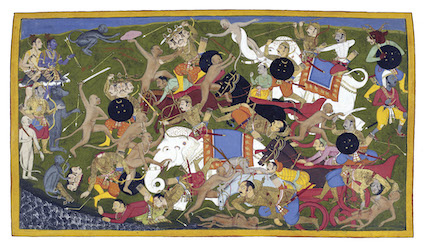 Devoted to the Devoted

While the battle ultimately boils down to the final confrontation between Rama and Ravana, which Rama won decisively, the trends were set earlier in the battle, with Ravana’s many generals falling, one by one, to Rama’s monkeys. To better appreciate the extraordinary dedication of the monkeys, let’s compare the relationships of the two armies with their respective leaders.

The demons had known Ravana for a long time; he had been their monarch for decades, many of them having known him throughout their life. And despite his atrocities elsewhere while plundering and conquering the universe, he seemed to have brought phenomenal prosperity to Lanka, earning for it the sobriquet “the golden city.” The demons had seen both Ravana’s power and his prosperity, the latter being shared abundantly with his citizens.

In contrast, Rama could provide nothing to the monkeys assisting Him. He was an exile with no wealth to share. Moreover, the monkeys hadn’t known Rama for long. For that matter, even their present king, Sugriva, who was Rama’s ally in their own ranks, hadn’t been their king for long. Yet the monkeys were ready to lay down their lives for Rama. Where did their dedication come from? It could partly be from the ethic of obedience to authority that is drummed deeply into soldiers. Additionally, the leading monkeys were great devotees; so, their devotion for Rama could have inspired similar devotion among the other monkeys. But beyond all such factors, the major cause of their devotion was the character of the object of their devotion: Rama.

The Ramayana brings out the contrast between Rama and Ravana graphically by describing what they did during the war at the end of each day’s battles. Each night, Ravana would tell his surviving soldiers to throw the corpses of the slain soldiers into the ocean, and throw them so deep into the ocean that they would not float back ashore. The reason? He didn’t want the monkeys to see any demons’ corpses on the shore. He wanted them to become disheartened by thinking that their fight the previous day had been largely ineffective with hardly any casualties among the demons. Ravana spared practically no thought for his martyrs; he exhibited a “use-and-throw” attitude towards them: Use them for his purposes as long as they could fight, and throw them away once they couldn’t fight.

Seeking Help for Those Who Help

When the war ended with the fall of Ravana, the gods assembled in the sky, lauded Rama for His heroic achievement, and urged Him to ask for some benedictions. Of course, Rama, as the God of the gods, is the giver of benedictions, not the receiver. But because He had descended to the world to demonstrate the role of an ideal human being, He played that role to perfection, acting as subordinate to those who were actually subordinate to Him.

Responding to the gods, Rama didn’t ask any benediction for Himself, but instead asked benedictions for His monkeys. Acknowledging that they had accepted immense hardships on His account, He requested that they be blessed with abundant food and water wherever they lived.

More importantly, He asked the immortals to revive the monkeys who had been slain but whose bodies hadn’t been totally mutilated. And those monkeys sprang back to life, healthy and happy.

Soon, after Sita was reunited with Rama, and Vibhishana crowned the king of Lanka, the time came for the separation of the monkeys from their master. The separation came so suddenly as to seem like a rupture. With His fourteen-year exile nearly ending, Rama was anxious to return to Ayodhya on time – primarily because His brother Bharata, reluctantly ruling in Rama’s absence, had said that he wouldn’t sustain his life for one moment beyond the fourteen years.

To ensure that He reached Ayodhya in time, Rama, on the suggestion of Vibhishana, decided to take the Pushpaka plane that Ravana had stolen from his cousin, the treasurer of the gods, Kuvera. As Rama was about to ascend the plane and depart, He saw the solemn, even dejected, faces of the monkeys. Reading their minds, Rama invited them to join Him in the plane, which had the mystical capacity to expand. And thus the monkeys had the ride of their life as they flew through the sky along with their beloved Lord to His kingdom.

When the plane was flying over Kishkinda, the monkey’s kingdom, Rama ordered the plane to descend and asked the monkeys to invite their wives and children to join in the journey to Ayodhya. Thus they all came to Rama’s capital and had a wonderful time enjoying the festivities as they beheld the glorious coronation of their glorious Lord.

Rama’s example demonstrates how we can be mindful of those who are serving us. In today’s corporate culture – where interactions tend to become highly depersonalized, where employees may be handed a pink slip on any day without even the least intimation, where security guards watch over fired employees as they clear their desks lest the disgruntled employees place some bugs in their computers or otherwise sabotage the projects from which they have been evicted, where termination is conveyed in such heavily sanitized jargon that people feel the voice at the other end comes from a mouthpiece, not a human being – the relationship between employer and employee in the Ramayana can be an inspiring model for sustainable relationships.

Where employers have, like Rama, an ethos of caring and sharing, the relationships formed go beyond ordinary business-centered give and take to personal bonds that bring out the best from everyone for everyone’s well-being.

We live in a culture of use and throw; we buy objects only to throw them away when they stop seeming attractive enough, even if they are still usable.

Such a use-and-throw attitude, when applied to things, has serious environmental consequences – much land, water, and air is damaged in our efforts to manage what we have rejected as waste. Still, the consequence of this attitude may seem remote to us unless we live near the environmental degradation. However, when the use-and-throw attitude is applied to human beings, the cost is far more immediately and intensely felt. We may not feel that cost when we happen to be the holders of this attitude, but we do feel it when we become its targets – when people trash us out of their lives. We may rant at their insensitivity or even monstrosity, but they are simply the bitter fruits of the seeds we have sown, individually and socially. Which seeds? The seeds of the materialistic culture we have adopted. In materialism, life has no purpose except to enjoy material pleasures – and others’ existence has no purpose unless they contribute to our material pleasure. While most of us won’t say things that bluntly, sanitized speech doesn’t change the reality – it only dulls our awareness of the reality.

In contrast with such a materialistic worldview, a spiritual worldview is far more conducive to cultivating a culture of care and share. With a spiritual vision, we see people not as things to be used for our gratification but as persons with emotions who, in their essential nature, are just like us. We understand that we all are souls and thus parts of the Supreme Whole, who appears in this world as Rama, Krishna, and other divine incarnations. When we see that we all are parts of the one same divine family, we don’t depersonalize others, but sense our connection with them and feel inspired to treat them more personally.

Personal interactions are best fostered by not just a spiritual worldview but by a spiritual devotional worldview. Practicing bhakti-yoga to kindle our devotion to the personal Whole infuses within us a service attitude towards Him and by extension to His parts, thus foundationally transforming how we relate with others.

The One Master Among Many Masters

That the Lord is the supreme master eminently worthy of our service and devotion is a recurrent theme in bhakti literature. In an insightful verse from the devotional composition Mukunda-mala-stotra (17), the great saint Kulashekhara, who had been a powerful king in his pre-devotional life, compares serving the Lord with serving an ordinary master: “Our master, the Personality of Godhead Narayana, who alone rules the three worlds, whom one can serve in meditation, and who happily shares His personal domain, is manifest before us. Yet still we beg for the service of some minor lord of a few villages, some lowly man who can only meagerly reward us. Alas, what foolish wretches we are!”

He contrasts mundane masters with the divine master on four counts:

The foregoing doesn’t necessarily mean we shouldn’t serve our bosses – it means we shouldn’t identify ourselves with our role, but should harmonize it with our identity as servants of our eternal Lord.

Devotion’s Inclusiveness: Unqualified, But Not Disqualified

While these four factors focus on the Lord and what He as the master brings to the bhakti table, another theme recurrent in bhakti literature is that we don’t need to bring much – all we need is the desire to serve. Even if we are materially unqualified, having no significant abilities or having a regrettable track record of wrongdoings, we are still never disqualified.

Rama, by engaging monkeys in His service, demonstrates that His service is open to everyone. He doesn’t need us to be highly trained and qualified to be able to serve Him. We can start our service from where we are with what we have. And He, by His inconceivable potency, will guide and empower us to do more and better service.

Of course, many of the monkeys serving Rama were gods who had descended from the celestial realm to the terrestrial realm through the path of monkey wombs. Still, that those gods took birth in the humble monkey species and from there rendered extraordinary service is instructive and illustrative of the inclusiveness of bhakti.

Thus the Ramayana gives us the confidence that no matter how unqualified we may be, we are never disqualified – we can still strive to serve our Lord and thereby progress devotionally towards inner satisfaction and outer contribution.

When we learn to live in harmony with our nature as the servants of our Lord, we become conscious agents of change who help replace the use-and-throw culture with the care-and-share culture.