“I hope they don’t come up to me,” I thought on seeing devotees for the first time. “It would be so embarrassing.”

After a twenty-year interval, the Hare Krishnas get a second look. 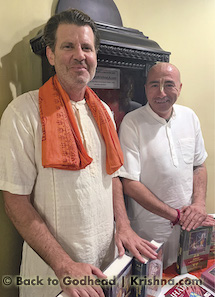 I vividly recall seeing the Hare Krishnas as they chanted down the brick street of the Gaslamp District in downtown San Diego one week after I got out of the military. Happily singing that famous mantra, they slowly approached me where I stood outside some random bar.

“I hope they don’t come up to me,” I thought. “It would be so embarrassing.”

I put on a condescending smirk, and they went by on their merry way. Little did I realize at the time that I would become a devotee, finding myself inside the doors of New Dwaraka Dhama in Los Angeles almost two decades later.

Growing up in a small rural town in Iowa, I was exposed only to Christianity, like most people who have grown up in the U.S. since its founding. I was often told that Eastern religions are weird and cultish, that they worship strange idols, and that the adults gather to do nothing but chant meaningless mantras all day to avoid doing real work. And I took it in, hook, line, and sinker. As with so many youthful beliefs, I was wrong.

I have been wrong about a great many things over the years, too many to count to be sure, but the biggest mistake has been depriving myself of any meaningful connection to spirituality. Growing up in the conservative Midwest certainly limited me to being exposed to only a few forms of Christianity, but I nonetheless never felt a connection to Christianity, or any of the Abrahamic religions for that matter. I do not recall ever meeting a Hindu or a Buddhist in any town or city near where I grew up. The lack of spirituality continued for many years until about a year ago when I read Forbidden Archeology, by Michael A. Cremo (Drutakarma Dasa) and Richard L. Thompson (Sadaputa Dasa). Then everything changed. A connection was made.

I was so moved by the authors’ words that I wrote to Drutakarma. He kindly replied, and he continued to reply to my inquiries. Since I lived nearby, he suggested I attend a Bhagavad-gita class at the Los Angeles temple, where he resides, and so I took him up on that suggestion and went on a Tuesday evening.

When I got there early and was browsing in Govinda’s Gift Shop, I was mildly annoyed to learn there was no class on Tuesdays, just a kirtana, but I decided to go anyway. Best decision of my life.

Twenty years after encountering the Krishnas in San Diego, I walked into the Los Angeles temple and was immediately greeted in the most warm way by a friendly person manning a book table. I asked him his name, and he pointed to his eye and replied “Aitota” (pronounce eye-tota). As I stood there not knowing what to do, he grabbed a chair for me and told me to sit.

“Listen, and feel the vibration of the mantra being chanted,” he instructed.

I did just that, and for the next hour I sat completely still listening to the kirtana, the emotions I experienced ranging from sorrow to joy to weeping tears of happiness. It was a life-changing event for me, as similar events have been for many hundreds of thousands of devotees since 1965 when Prabhupada landed in New York Harbor. It felt like a curtain dropped to reveal the divine truth behind it.

I began to attend regular classes and morning sessions, though it hasn’t been the smoothest entry into Krishna consciousness for me, especially regarding temple etiquette. As many readers know, there is a fairly lengthy list of do’s and don’ts. The same morning I attended my first Srimad-Bhagavatam class, given by the visiting Radhanath Swami, I held my cupped hand way too high above the rinsing bowl after drinking caranamrita, and water splashed all over the beautiful marble floor. Next, rather than sitting on the floor like most of the devotees, I sat in one of the chairs along the back wall generally reserved for senior devotees. My demerits were quickly piling up.

Continuing my laundry list of missteps, when I first started counting japa, I held the mala in my left hand without a bead bag, a no-no double whammy. And last but not least, when I first heard that one should count sixteen rounds every day of the holy mantra, I thought it meant reciting the mantra sixteen times. By my faulty logic, I was short 1,712 mantras. I would not be surprised if Krishna got a chuckle out of that one. I have since corrected my math and dutifully do japa correctly every morning. It is the very least I can do for Lord Krishna, for He has shown me the divine path to Vaikuntha, a path I humbly and faithfully follow with all my heart.

Those tears I shed when I first heard the Hare Krishna mantra inside the temple were like a desperately needed rain on a parched land devoid of nutrients where very little was growing. And believe me, nothing was growing inside me besides despair and hopelessness. Bhakti-yoga has been a course correction in my life. Through the clear lens of truth, I perceive the world much differently now. I now look back on that ignorant person who watched the Krishnas in San Diego twenty years ago and think so much lost time has elapsed. On the other hand, better late than never. To never have had Krishna in my life would now be unthinkable.

It has been a shock to my system, to be sure, and it caused some morose feelings the first few weeks, mainly over the regret of time lost and the realization of such emptiness inside, but that has since passed, replaced by ever-increasing joy in finding Krishna. He was always there; I just wasn’t looking.

Srila Prabhupada writes, “When we speak of hearing and chanting, it means that not only should one chant and hear the holy name of the Lord as Rama or Krishna (or systematically as the sixteen names Hare Krishna, Hare Krishna, Krishna Krishna, Hare Hare / Hare Rama, Hare Rama, Rama Rama, Hare Hare), but one should also read and hear the Bhagavad-gita and Srimad-Bhagavatam in the association of devotees. This primary practice of bhakti-yoga will cause the seed already sowed in the heart to sprout, and by a regular watering process, as mentioned above, the bhakti-yoga creeper will begin to grow.” (Srimad-Bhagavatam 2.2.30, Purport),

Of course, just one short quote from one purport of Prabhupada’s sums it up better than I ever could encapsulate in an entire book, let alone this short essay. Krishna consciousness encourages you to dive deeply into the ocean of nectar straight down to the bottom, where it is most blissfully still. The ultimate requirement for any devotee is simple: devotion and service to Krishna. That’s it. No more is needed to go back home, back to Godhead.