Spiritual thoughts arise naturally at the holiest of holy hills.

Reflections during an early-morning walk in the holiest of holy places. 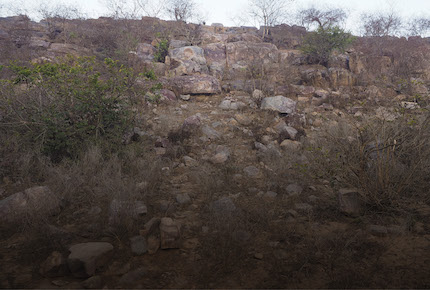 Every spiritual and religious tradition has holy places where spiritual life is more easily accessible. The Sanskrit word for such places is tirtha, literally meaning a place where one can cross – like a narrow part of a river. Tirthas act as a passageway, crossing place, or portal where one can easily go from materialistic to transcendent awareness. We can think of a tirtha as something like a place where one can get a phone or WiFi signal, allowing us to access another reality. A tirtha can also be compared to an embassy of a country in a foreign land. Tirthas can be created temporarily, as when we make an altar in our home or turn a building into a temple. 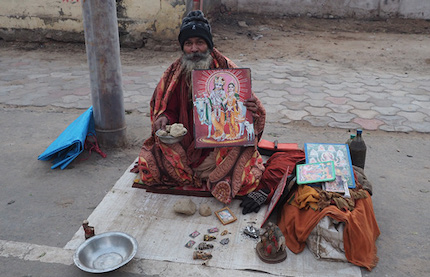 There is another type of holy place, called a dhama in Sanskrit. A dhama is not a passage to the spiritual world, but is the spiritual reality itself, appearing as if part of this world. The dhama is eternal and not created or destroyed even when the entire universe goes through cycles of creation and destruction.

One such dhama is Vrindavan in India. Spiritual activities there have a thousand times the effect of those done in ordinary places. Krishna and His eternal associates are always there, though only those with purified hearts can perceive their presence directly. Of the whole Vrindavan area, the most sacred places are Govardhana Hill and the two ponds at the hill’s northernmost point: Radha-kunda and Syama-kunda. I had the fortune to spend some time on a writing retreat next to Govardhana Hill during the winter and wrote this reflection about a walking meditation at sunrise.

This morning, again, I decide to take my exercise and meditation walk early, in the cold and fog, rather than wait for the midday sun. It’s not a special holy day, and the mixture of an ordinary day and the cold means the parikrama marg, the road used by pilgrims for the sacred walk around Govardhana Hill, is mostly empty. Still, at any time of day or night, on any day of the year, there are always some pilgrims walking around the hill. On a holy day with good weather the road is as crowded as Macy’s in New York City three days before Christmas. Generally, the pilgrims are obvious by their shoeless feet (out of respect, one is supposed to walk without shoes around the holy hill), though some wear heavy socks or wool slippers, or even cloth and plastic on their feet, so they are wearing “shoes that aren’t shoes.” On this very cold morning, most pilgrims have sweaters (jumpers), coats, and hats that seem out of sync with their bare feet on the numbingly chilly sand or asphalt. My own body, from head to toe, is covered with many layers. By the end of the walk, I feel slightly warm from the exertion. 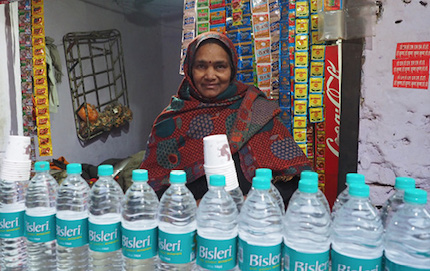 The government keeps most cars and motorized rickshaws off this road, so the vehicles today are electric rickshaws and bicycles, but even they are few. So there’s no noise of motors or blowing horns. There are street vendors on the side of the road, their handcarts piled with bananas and fried garbanzo beans. Pilgrims mostly buy these to feed the local wild fauna – rhesus monkeys, dogs, pigs, cows, and bulls. The cows and bulls eat bananas whole, peel included, whereas the monkeys leave the peels hither and thither. All these wild animals – especially because the pilgrims feed them and thus attract large numbers of them – also leave their excrement here and there, so a brisk exercise walk must be accompanied with frequent cautious glances at where one is walking. 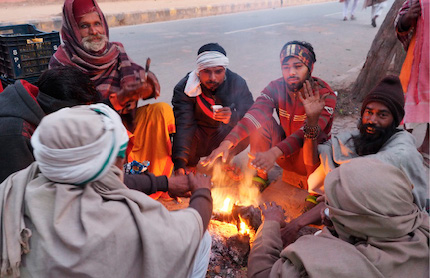 As I walk past, local keepers of “permanent” shops rather than handcarts open their closetlike structures, most of which look as if children assembled them for their first carpentry project. They sell snacks and bottles of water, catering presumably mostly to the pilgrims. Locals and shopkeepers huddle around fires they have made by burning trash and sticks. There are also the “intentionally homeless” people – mostly but not exclusively male. They may also be squatting around fires or, wrapped in shawls and blankets, sitting on the sandy part of the road by the fence that separates the road and Govardhana Hill, holding their begging bowls, perhaps reciting prayers. Some of these intentionally homeless are on the Govardhana side of the fence, where they have created something resembling a residence in the form of a lean-to type of tent. Others just have blankets. Most of them have come to Govardhana to renounce the world and find God, Krishna. I’m sure some have other, not so lofty motives, but, regardless, their living conditions are less than rudimentary, and their residence is at the foot of this most holy of hills.

I’m on the east side of Govardhana Hill, walking north, in the opposite direction of the pilgrims walking around the hill. Doing my best to avoid the huge, untended, generally peaceful bulls, I get to a gate in the fence that surrounds the hill. Making my way inside, I connect with the inner path around the hill. Most pilgrims walk on the outer path, though on holy days both paths are full. At this gate there is a kind of natural division – to the south, the path is very sandy, and pilgrims often switch from the outer to the inner path here; to the north, towards Govardhana town, the path is firm and solid. Many pilgrims visit the ponds, and many religious rituals are conducted there. Between those two gates there are rarely pilgrims on the inner path. I surmise that the ponds tend to hide the fact that the inner path starts there and so people simply do not know there is a place to walk in that area so very close to Govardhana Hill. 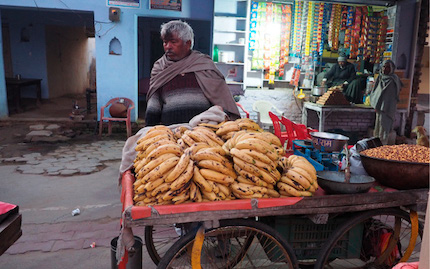 That firm section of the path between the gates has trees on either side whose leaves cover the path as a canopy, welcome when the weather is hot and sunny. The beauty of this firm, tree-lined-and-covered path, with Govardhana Hill just a few steps away, is in its seclusion and privacy, though the road on the other side of the fence is clearly visible, and the sounds from the road usually audible. But the road sounds are not so much horns, as in most of India, including most of the general Vrindavan area. Rather, the sounds here are of singing and praying, often groups of pilgrims in call-and-response fashion, and sometimes with amplification. 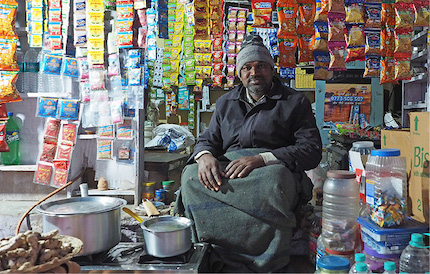 Today my main companions on this short part of the path are animals. The monkeys are having a battle, aggressively running at each other and screeching. I give the warring factions a wide berth, bringing me to a sister, sandier path even closer to Govardhana. Generally, the monkeys and I mind our own business in this area, though I carry a large stick to scare them if they get close, as they can be very dangerous. There are also huge pigs here with their offspring. They run at the sight of my stick. The many feral dogs are usually peaceful on this part of the path, as are the cows. 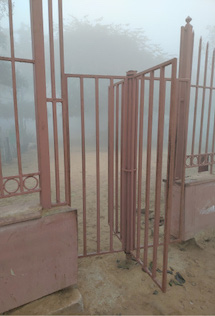 Yesterday I saw a nilgai, a local antelope, climbing the hill within a few meters of me. Some days there are many peacocks and parrots. Sometimes a pilgrim or two walks here, but mostly the other humans are those who have made their home in this area, though without any structure one could call a house. One such person is still sleeping, wrapped in blankets, another is picking something from a tree, another is praying. As I come here nearly daily when I am visiting Govardhana, I quickly become part of the scenery for these people, as they become for me. We exist in this place in parallel, without the slightest overt interaction.

This part of the path, and the pond by the far gate, is nearly always spotlessly clean. But now it is early morning, so some small trash has accumulated here since the cleaner went home yesterday. The cleaner is a woman, probably older than I am, though she could have aged faster in a harder life than I have had. She’s a widow, abandoned by her family but joyfully living in this holy place. Whereas most of the thousands of such women have only begging (or, if they are young, unmentionable things) as their means of living, the RadhaSeva project I support employs her and similar women in doing something they love – cleaning this holy land they have adopted as home. Before RadhaSeva hired her and took responsibility for cleaning this area, the pond was a giant garbage dump, and the path a veritable river of trash. I’m walking too early in the day to meet her today. When I come at midday, we greet each other, and if she’s not fully absorbed in her sweeping or in cleaning out the pond, she will beam me a wide smile and sometimes even grant me a hug.

It’s too wet this morning to sit anywhere, so I pass the fallen trees and slabs of construction material I sit on when weather conditions are favorable. Standing as close as possible to Govardhana Hill, softly chanting Hare Krishna, Hare Krishna, Krishna Krishna, Hare Hare/ Hare Rama, Hare Rama, Rama Rama, Hare Hare, I marvel at how Krishna is manifest here as each stone, each pebble. Yesterday I saw many colors of rocks here, a number of them nearly white. Today I see a triangular pure-white crystal rock; it’s a cloudlike mini hill with a natural mark that looks like tilaka or a snake. I marvel at how Krishna lifted the long and rocky Govardhana Hill so many thousands of years ago. I marvel at Govardhana Hill as a continuing shelter, a friend, a source of peace. 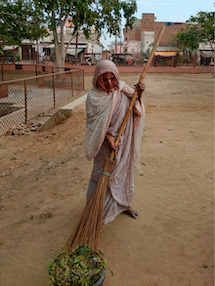 The fog that obscures the more distant parts of Govardhana brings my thoughts to the descriptions in the scriptures of a dewy forest in the spiritual world. There is a kind of comfort and mystery in mist and fog, a feeling one gets when wrapped in blankets and without a care for the world on the other side of the thick wool. Such is the fog this morning, on this path, alone with Govardhana.

Wherever I am in the world, my daily meditation and prayer is centered on Govardhana. Yet, to be here physically has a kind of soft magic. Especially early in the morning, especially on this firm, tree-covered part of the path, especially when the world feels like it’s only Govardhana and me, I am instantly in the presence of God.