The Bhagavad-gita gives the key to ending the scourge of racism.

How the practice of bhakti-yoga can solve a persistent societal problem.

There’s a perennial deep-rooted phenomena that affects millions of people worldwide. Historically, it has led to untold numbers of vicious hate crimes and revolts. Even today, in some places children are afraid to go to school because of it. It is racism. 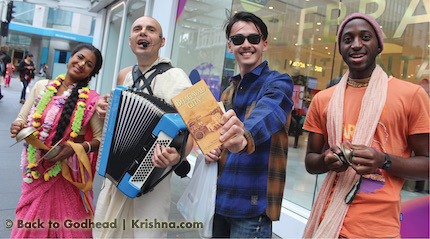 Discrimination against someone simply because of his or her race is unfortunately not foreign to us in our current world. World leaders endorse it, millions practice it, and millions suffer from it. It has been going on for so long that it seems there may not even be a solution for it. The ancient tradition of bhakti-yoga, however, has answers to this enduring problem.

How exactly can we combat racism? One important way is to readjust our view of others. The Bhagavad-gita provides us with the insight to make this possible. Krishna tells Arjuna, “The humble sages, by virtue of true knowledge, see with equal vision a learned and gentle brahmana, a cow, an elephant, a dog and a dog-eater [outcaste].” (Gita 5.18) A learned sage sees all living beings equally despite whatever body they happen to be in. Whether someone has the body of a dog, or the body of someone who eats dogs, or even the body of a mad politician, a humble sage sees them all on an equal level.

But why would this be? The wise know that the real living entity is not the body, but rather a spiritual entity – the soul. The body is just like a dress the living entity puts on for some time. When the body gets old, one must change the “dress” of the body for another, in the same way that I may change out of a t-shirt and shorts into a suit. Our bodies are changing all the time, yet we remain the same spiritual soul. Those in knowledge don’t view people according to the particular bodily dress they happen to be wearing, but rather they look at everyone on a deeper level by seeing them as spiritual souls, equal to all other living beings.

After all, while we may judge people for their fashion choices, we don’t let such choices permanently affect our opinions of them. If I happen to wear a really goofy t-shirt one day, my friends may tease me a little, but they wouldn’t stop being friends with me or treat me differently.

So why then do we continue to discriminate against others based on the outer dress of their body? Someone with a black body or a white body now may in the next life be born into a German family that makes Volkswagen Beetles, or they could be born as an actual beetle. Viewing someone as lesser or higher depending on their race is imperfect vision because any type of bodily designation is impermanent. By seeing others as fellow spiritual souls equal to ourselves, however, we treat others on the basis of who they really are, and we avoid racism because we don’t let trivial matters like the particular body someone has determine his or her worth.

How Can We Practically Develop This Vision?

Of course, while in theory trying to develop the vision of equanimity sounds simple enough, in practice it can be difficult. Cultural forces are so strong that even if we don’t succumb to racism, we may be in an environment where racism is prevalent. How can we strive to develop an attitude of equality to all and in doing so set a positive example for others?

One way to develop this vision is to practice bhakti-yoga. By such practice, one can develop qualities like equanimity automatically. One of the main practices of bhakti-yoga is to chant the names of God, especially the maha-mantra: Hare Krishna, Hare Krishna, Krishna Krishna, Hare Hare/ Hare Rama, Hare Rama, Rama Rama, Hare Hare. Just as someone sleeping can be woken up by sound, we can be reawakened to our original spiritual nature by chanting and hearing the maha-mantra. In our pure state, we are naturally blissful and free from impurities like anger or envy. 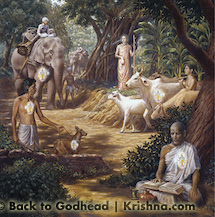 Why does the mantra work? The maha-mantra consists of names of God, and because God is omnipotent, His name is nondifferent from Him. Thus by chanting names of God one is associating with God and thus becoming purified. Bhakti-yogis also know that God is one but has many names, such as Krishna, Allah, and Jehovah. Thus one can chant the names of God in one’s respective faith, and the purifying effect will be there.

A common criticism of bhakti-yogis is that their chanting is impractical. When one takes a closer look at what the chanting does, however, one will find that it is a very practical use of one’s time. The chanting purifies one’s consciousness, which in turn leads one to think and then act in a more considerate way towards others. Therefore the practice of chanting the names of God can stop racism at the root because it empowers us to be more loving towards one another and reluctant to discriminate.

In addition to chanting the names of God, however, bhakti-yogis do more active things. Chanting God’s names spiritualizes the chanters’ consciousness so that they can spiritualize the rest of their normal activities. Thus bhakti-yogis can perform their occupations or other duties with the attitude of pleasing the Supreme rather than themselves. This helps cultivate qualities like compassion and selflessness rather than greed or envy. The result is that one will be compassionate towards everyone, whether friend or enemy. Krishna describes this in the Bhagavad-gita (6.9), “A person is considered still further advanced when he regards honest well-wishers, affectionate benefactors, the neutral, mediators, the envious, friends and enemies, the pious and the sinners all with an equal mind.”

Therefore bhakti-yoga is a practical way to combat racism because it is not simply an intellectual adjustment, but a holistic process that purifies the heart so that one can love all living entities.

One who acknowledges the effectiveness of bhakti-yoga in helping to combat racism might still wonder how this will make a widespread difference in solving racial problems once and for all. Once again, Krishna gives us some insight as to how this can happen. He states, “Whatever action a great man performs, common men follow. And whatever standards he sets by exemplary acts, all the world pursues.” (Gita 3.21) If someone practices bhakti-yoga and develops a pure heart, then other people will naturally begin to follow the example. People are naturally drawn to follow those they think are great men or women, and certainly a bhakti-yogi who sets a strong example of loving every living being will earn respect. Therefore the purification the bhakti-yogis experience benefits not only themselves, but also society because other people will want to follow the example of such pure-hearted souls.

History also shows that changing the hearts of the people is a more effective strategy than simply passing a law. For example, the Declaration of Independence states, “All men are created equal.” But did the founding fathers really believe that all men were created equal? Well, considering how they kept slaves and only considered them three fifths of a full person, I’d say not. It took the work of many abolitionists to change the hearts of the people. Therefore simply passing a law won’t fix the problem of racism because the real problem is in the heart.

It shouldn’t be up to the oppressed to have to fight for their equality rights. All people, whether rich or poor, white, black, yellow, or brown, should learn to accept one another on the basis of the soul and not the external dress of the body. If it became a genuine societal value to view others equally, then not only racism but also hatred in general would be reduced and there would be much more peace in the world. Of course, it may take a long time for the world to come to this platform. Still, if we work to combat the impurities within us, ultimately the evil in the outside world will also reduce as a natural consequence of hatred being replaced by love.