Both religion and science can be objects of faith.
By Harivamsha Dasa
The volatile history of human faith, and understanding faith through Gita wisdom. 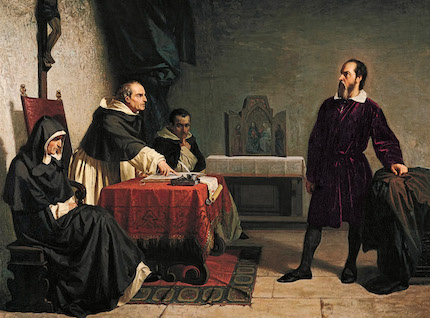 The word faith comes from the Latin word fides (or the old-French word feid), which means to have confidence or trust in a person, thing, or concept. The object of faith can be this-worldly or otherworldly.

It is important to note, however, that the object of faith must be beyond the usual human sense perception. Otherwise, what reason do we have to even talk about vesting our trust in something which somebody can unambiguously see, hear, smell, taste, or touch? An apple’s hanging on a tree, falling through the air, and landing on the ground does not involve the territory of faith – the apple is changing its states right in front of the observer’s eyes. In this example, the matters of faith are instead concerned with the law of gravity, an abstract theoretical construct formulated to render tenable the daily “falling” events of the world. The law itself is beyond normal sense perception – we cannot see, hear, smell, taste, or touch it. We do see the objects falling, but whether an object will fall everywhere and in all situations, as dictated by the “law of gravity,” cannot be ascertained for sure. This is because no one has verified this law in temporal and geographical terms exhaustively. Nonetheless, we all believe in the law of gravity, which makes it and not the falling of the apple a contender for the object of one’s faith.

And so also are the sacred texts of various religious traditions of the world objects of one’s faith. The narratives in these texts – such as the story of the primordial couple, Adam and Eve in the Bible, or the carrying of the mountain of medicinal herbs by Hanuman during the war between Rama and Ravana in the Ramayana – are beyond sense perception. They cannot be proven or disproven.

Yet very much like the law of gravity, which provides material predictability in our daily lives, narratives such as those of the Bible or the Ramayana, provide for many people a psychological framework for existence and an enduring spiritual purpose larger than material life; they proffer a grand vision to help them navigate the material world meaningfully, morally, and spiritually.

Religion and science both, therefore, can be the objects of faith for the faithful. History, however, has scarcely remained unbiased in matters of faith for the last two millennia in the West, a phenomenon which has had its ramifications in the East too. This essay briskly time-travels to come face to face with the competing objects of human faith and provides a view through the lens of Vedic literature, primarily Bhagavad-gita and Srimad-Bhagavatam.

Eppur si mouve: “Still it moves.” Priests of modernity reckon this historical phrase as the harbinger of the rise of the age of reason and the absolute monarchy of empirical facts. It was first used as the title of an episode by an Italian literary critic and linguist, Giuseppe Baretti, in his book The Italian Library. The episode concerns the transfer of the celebrated mathematician, physicist, and philosopher Galileo Galilei from house arrest to his home in Arcetri near Florence, where he lived till the end of his life. Giuseppe Baretti writes: “The moment he was set at liberty, he looked up to the sky and down to the ground, and, stamping with his foot, in a contemplative mood, said, Eppur si mouve, that is, still it moves, meaning the Earth.”

Christian tradition had long supported the Aristotelian geocentric viewpoint that the sun moved around the earth, while Galileo, following his predecessor Copernicus, postulated a heliocentric model of the universe – that the earth moved around the sun. Galileo’s Eppur si mouve was directed against this specific faith in the Christian dogma which he wanted to challenge with the facts, for he was an ardent lover of God’s fascinating creation; it was not against the entire Christian religion. He valued reason – scientific inquiry based on empirical observations – much more than revelation from the sacred texts, at least for the observable phenomenon of the world, and in particular regarding planetary motion.

The social fallout was significant. Galileo’s trial and his dogged faith in his theories gave a host of reasons for those frustrated with religious hegemonies to altogether sever their ties with religion. The high priests of science decided to purge the connection of science with religion altogether, widening the existing gap between the two. What earlier began as just a dispute within Christian circles over whether to preference revelation or reason now got full blown into the establishment of two polar opposites – religion on one side, and science, now modern science, on the other.

Yet science per se does not reside outside the territory of faith. Certainly the objects of modern science may be more empirical in nature. For example, the law of gravity has greater reproducibility than the principles enshrined in the sacred scriptures. This is because the gravitational law can be empirically testified. Nonetheless, the law of gravity still remains at best a hypothesis that has not yet been falsified, for it has not been tested rigorously and comprehensively at all times and everywhere and, in general, between any two interacting bodies. Faith, therefore, is an essential cornerstone in the foundation of modern science as well.

Galileo’s trial marked a transition in human thought which moved from tradition to modernity. Now the grand narrative would not be via religion, as in the days of tradition, but through scientific empirical observations and the theories thereof. The traditional anecdotes and the guiding principles would be hence considered mythological and allegorical at best, and in the face of modern science, irrelevant distractions.

As we march on further in the twenty-first century, neither the religious adherents nor the science proponents stand out. The Age of Enlightenment, which had crowned modernity, already saw disillusionment with the modern science. The bloody wars of the twentieth century and the perils at individual, societal, and ecological levels which the scientific advancement unleashed further affected the reputation of modern science. Science is certainly recognized and embraced for its utilitarian purposes, but not as the single contender for the object of one’s faith.

So who gets to keep the booty of faith in the new millennium? It is neither tradition nor science. Rather, it is one’s subjective experience. The age of post-modernism begins. Knocking off both religion and science as objects of one’s faith, post-modernism attempts to relativize everything – one may choose whatever he or she feels like choosing! After all, didn’t somebody say, as postmodernist may argue, that one man’s food is another man’s poison? As long as faith helps one make sense of this increasingly complex world, it can be consigned anywhere – that will be one’s science, one’s religion. The Vedas, Buddha, Tesla, the Beatles, AI, Bitcoin, what have you – anything can be the object of one’s version of “faith” as long as it doesn’t interfere with another’s version. Post-modernist argue that there cannot be just one single contender for the object of one’s faith, for everything is socially conditioned and contextual. Earlier, tradition and then modern science both gave their versions of a grand narrative or universal theory. Post-modernism, however, eschews any unified understanding.

Do we start the twenty-first century on flimsy grounds where everything is relative and we have no unifying understanding of our existence? Did science and religion both fail completely? Do we have to live with an amorphous faith? Far from the West, can the classic and concise spiritual texts Bhagavad-gita and Srimad-Bhagavatam, which have wielded authority in practical metaphysics for ages, speak to us to shed some light on the understanding of faith and its volatile history?

In Bhagavad-gita Krishna charts out a level playing field to evaluate beliefs in any phenomenon, whether science or religion or one’s subjective experience. He denotes faith with the word shraddha, broken down as shrat, “truth,” and dha, “holding.” Thus shraddha is the quality to hold truth. But the question here is, What is the truth? Krishna explains:

“O son of Bharata, according to one’s existence under the various modes of nature, one evolves a particular kind of faith. The living being is said to be of a particular faith according to the modes he has acquired.” (Gita 17.3)

Krishna says that relative truths fall under several categories corresponding to varied psychophysical dispositions, known in the Vedic canon as gunas, or “modes” of material nature. These psychophysical dispositions are described as complex combinations of one’s internal makeup duly influenced by the external ambience. Thus the result is the inclination to a particular relative truth. Krishna calls this inclination “a particular kind of faith” – a particular shraddha.

Therefore the object of one’s faith is closely tied up with one’s modality, i.e., one’s particular conditioning by the modes of nature. And as the modality itself is dynamic (Gita 14.10), morphing and transforming through life’s events and experiences, the object of one’s faith too is a shape-shifter. Through individual change, the dominant faith of the collective human society also changes its object with time, as we saw earlier through the bumpy history of faith from tradition to modernity to post-modernism.

A categorization of various objects (vastu) in which society may place its faith is provided by the notable Vaishnava theologian Vishvanatha Chakravarti Thakura in his commentary to the second verse of Srimad-Bhagavatam:

The import is that faith in unreal objects (avastu), or in real but temporary objects (avastavam vastu), or in ideologies associated within their domain (which includes even the types of religion in human society that are mainly concerned with material duties and economic prosperity), all constitute holding on to temporary, relative, and hence perishable truths. As modalities morph individually and collectively, humanity is bound to witness further newer variants of such relative truths as monopolizers of human faith.

These relative truths, however, are all temporary. Bhagavad-gita’s central message is this: the permanent – us, whose real identity is the soul behind psychophysical dispositions – cannot settle for the temporary. Due to the ephemeral nature of these relative truths, both their associated meaning and the happiness in life they produce are flaky and fleeting.

But above all of these relative truths is the enduring faith, which rests on the Absolute Truth (sat), which Vedic tradition addresses as Krishna. This is because both the illusory existence of the unreal objects (avastu) and the conditional existence of the real but temporary objects (avastavam vastu) rest on the Absolute Truth. And as Krishna states this in the Bhagavad-gita (7.7): “O conqueror of wealth, there is no truth superior to Me. Everything rests upon Me, as pearls are strung on a thread.” Faith with its object as the Absolute Truth is different from materially motivated religious tradition, empirically conscious modernity, and experience-obsessed post-modernism. This faith is enduring due to the nature of its object and therefore can bring everlasting peace and happiness to the faithful.

Hence, as has been seen and recorded through the history of humankind, the intelligent and astute perceivers of the world, who are expert in sifting the real from the unreal, work to garner and safeguard this particular variant of faith – faith in the Absolute Truth, Krishna. Other varieties of faith, such as faith in scientific theories about the pragmatic operation of the world, in religious traditions with primary interest in subtle or gross material enjoyment, or in subjective individual experiences, are appreciated and accepted by the wise insofar as they help live sustainably in the material world and nudge one towards firm conviction and subsequent realization about Krishna.

Srimad-Bhagavatam, the revered text promoting this single-minded search for transcendence, speaks categorically as follows in verse 1.2.10: “Life’s desires should never be directed toward sense gratification. One should desire only a healthy life, or self-preservation, since a human being is meant for inquiry about the Absolute Truth. Nothing else should be the goal of one’s works.”