When approached with the right attitude, life’s challenges can nurture our spiritual growth.

A change of perspective helps, and inner satisfaction is indispensable. 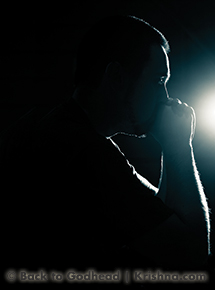 People often say that life is a journey – even when they don’t seem to have a desired destination in mind. Still, it is true that as we go through life, we encounter numerous people and circumstances that enable us to grow and mature, even though the journey of life is not always a clear path and has its ups and downs. We often find ourselves in difficult situations unpleasant to go through. Fortunately, there are ways to deal with difficulties. First of all we can look at them with a different attitude. As the saying goes, “We can complain because rose bushes have thorns, or rejoice because thorn bushes have roses.” Thus, instead of looking at events in our life as obstacles, we can look at them as opportunities. There is a great example of this in the Mahabharata, the world’s longest epic.

The Mahabharata is a battle between good and evil. The good Pandavas must battle against the bad Kauravas. The Pandavas and the Kauravas are cousins, but despite this, the Kauravas committed great crimes against the Pandavas. They stole the Pandavas’ land, tried to burn them alive, poisoned and tried to drown one of them, and attacked them with weapons. And if that wasn’t enough, they tried to disrobe their queen.

Despite these numerous crimes, the Pandavas exhibited great qualities of tolerance and forgiveness. But when they saw that the Kauravas were becoming tyrannical and destroying justice, they had to take action. First they tried to negotiate a peaceful settlement. But that didn’t work out, and they were left with no choice but to wage war against the Kauravas to restore justice to the kingdom.

The two parties soon found themselves on the verge of a battle, pitted against one another in a fight that would determine the fate of the Indian kingdom. Arjuna, one of the Pandavas, became despondent. He was a warrior and thus duty-bound to fight and restore justice to the kingdom. But he began to lament, feeling he was in a total lose-lose situation. Should he win the war, he would feel anguished on account of the bloodshed he had committed, especially since some of his relatives were fighting on the other side, and should he fail to conquer his enemies, he would die in the battle.

Lord Krishna, Arjuna’s charioteer and the Supreme Personality of Godhead, looked at the situation from a different point of view. Rather than looking at the battle as a hopeless situation, Krishna saw it as a hopeful one. Should Arjuna win the war, he and his brothers would enjoy an unrivaled kingdom on earth. Should they die in battle, they would be promoted to a higher realm because a warrior who dies on the battlefield fighting for justice is eligible to enter heaven.

The Value of a Different Perspective

Though we may not be as fortunate as Arjuna to have God personally instruct us, if we follow the instructions of the Lord or His representative then we become much happier. Thus, by looking at our challenges in a different light, we can also turn our seemingly hopeless situations into hopeful ones.

Moreover, by understanding the process by which we become frustrated, we can become less disturbed when dealing with difficult situations. Krishna describes the cause of frustration and anger in the Bhagavad-gita (2.62–63):“While contemplating the objects of the senses, a person develops attachment for them, and from such attachment lust develops, and from lust anger arises. From anger, complete delusion arises, and from delusion bewilderment of memory. When memory is bewildered, intelligence is lost, and when intelligence is lost one falls down again into the material pool.”

A good example of this is when a child sees an ice cream cone – he begins to hanker after it, desiring to enjoy it. But when his mother tells him he can’t have it, he becomes frustrated and angry because he wasn’t able to get what he wanted. Thus he suffers. Or let’s say the mother did give the child the ice cream cone but it wasn’t as tasty as he thought it would be. He would still be unhappy. Even though he got the ice cream, he still suffered, because it didn’t meet his expectations.

Thus, when we hanker after something with the intention of enjoying it, we become attached to it. But if we fail to enjoy it, or we enjoy it but it doesn’t meet our expectations, we can become frustrated instead of satisfied. In this way our desire to enjoy becomes the source of our frustration and anger.

By recognizing this cycle, we can better handle whatever curveballs life throws at us. Instead of getting bewildered every time things don’t go our way, we can understand that extreme attachment leads to anger, and thus we can prevent ourselves from letting anger take away our intelligence.

How do we prevent ourselves from getting overly attached to different sense objects? By being satisfied within. Then naturally we will be less disturbed by external events. Just as a river doesn’t disturb the ocean, because of the ocean’s fullness, different desires don’t disturb someone satisfied within, because he is already full in himself.

A practical way to become internally satisfied is to practice bhakti-yoga. Bhakti-yoga goes beyond the physical aspect of modern-day yoga and connects us with Krishna, or God, thus enabling us to taste spiritual bliss. Because the activities of bhakti-yoga give joy directly to the soul, we naturally experience a higher taste and find inner fulfillment. Thus we feel self-satisfied and no longer rely on external factors for happiness, such as money, wealth, or bodily pleasure.

One of the main activities of bhakti-yoga is to chant the maha-mantra: Hare Krishna, Hare Krishna, Krishna Krishna, Hare Hare/ Hare Rama, Hare Rama, Rama Rama, Hare Hare. Chanting these Sanskrit names for God brings great spiritual bliss. And we don’t have to chant these particular names of God. Bhakti-yoga is a nonsectarian process, so people are free to chant whatever name of God is given in their own faith or religion. Still, many people find the maha-mantra especially potent because it has been chanted for centuries and handed down through multiple generations of spiritual teachers and students.

Chanting the maha-mantra not only enables us to relish great joy, but it also purifies us. In our pure state, we experience boundless love for Krishna and devote ourselves to serving Him for His pleasure. In this position there is a reciprocal relationship between Krishna and us, and the more pleasure we try to give Him, the more we ourselves experience. Each of us, as eternal spirit souls, is originally in this pure state, but our pure nature is now covered by material contamination, like a drop of pure rainwater that has fallen from the sky and landed in the mud. Our impurity under the influence of the material energy is, however, temporary. When dirt is removed from a drop of water, the water regains its pure quality; similarly, when the dirtlike impurities are removed from our heart by chanting the maha-mantra, we become completely pure.

When we become completely pure, then we can understand fully that we are spiritual beings, servants of Krishna and part of Him. And even before we come to this stage, we gain great benefit from understanding theoretically that we are spirit souls and not the material body. From a broader perspective, we can contextualize our problems and understand that they are temporary. Even a lifelong problem can last only as long as our body lasts. While a lifetime sounds like a long time, compared to eternity it is merely a flash. The Gita (2.20) teaches us that we are everlasting, and therefore we are fortunately entitled to eternal life. Thus, while we may be constantly plagued with problems, if we understand the bigger picture of life we can realize how insignificant such problems really are in the grand scheme of things.

Ultimately, as souls it is in our best interest to revive our dormant love for God and our innate spiritual nature, which is eternal, full of consciousness and bliss. By reviving our spiritual nature, we can guarantee our long-term happiness and achieve a high level of happiness even while caged in our material bodies. Chanting the maha-mantra is a powerful way to revive our spiritual nature. It can be done anytime, anywhere, and we don’t need to renounce the world to derive benefit from chanting. We can even chant in the mind while performing our regular activities. Ideally, we should set some time aside to chant the mantra out loud, either on meditation beads or with musical instruments. By regularly chanting, daily if possible, we can rapidly discover its benefits.

Though life throws us into difficult circumstances, we can endure them if we change our perspective, take wisdom from the Bhagavad-gita, and practice bhakti-yoga. By doing so we will be less disturbed in the midst of even our most challenging difficulties.