Exploring an interesting parallel between the order of Lord Krishna’s avatars and Darwin’s theory of evolution.

The ancient Puranas spoke of evolution long before Darwin.

Although there are unlimited avatars of the Supreme Lord, the Vaishnava tradition singles out ten as representative of the rest. These ten are known in Sanskrit as dashavatara. Dasha means “ten,” and avatara means “descent,” from ava (“down”) and tarati (“crosses over”). 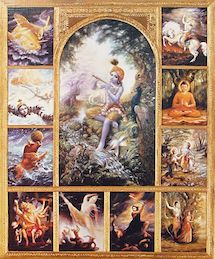 Although Jayadeva Goswami’s twelfth-century list of ten is arguably the most popular, there are several dashavatara lists in the Vaishnava tradition. Significant are those left to us by Vedanta Deshika (fourteenth century) and Vadiraja Tirtha (sixteenth century). There are few variants in these lists, and Jayadeva Goswami’s, the earliest of these three, is considered the standard: Matsya, Kurma, Varaha, Narasimha, Vamana, Parashurama, Dasharathi Rama (Ramachandra), Krishna (or Balarama), Buddha, and Kalki.

A surprising if much documented aspect of the dashavatara story is its connection with evolutionary theory. Evolutionists claim that we all arise from a single common ancestor, and like the branches of a tree, species separate from each other over time. Charles Darwin (1809–1882), the most famous proponent of this theory, was foreshadowed by the Puranas, which had already proffered a teaching of evolution. But rather than claiming that one species evolves into the next, the Puranas tell us that all species were created simultaneously and that each eternal living being evolves through the various species until it reaches perfection. In other words, the original theory involved an evolution in consciousness.

It is confirmed in Padma Purana that the species of life evolved from aquatics to plants, vegetables, trees; thereafter insects, reptiles, flies, birds, then beasts, and then human kind. This is the gradual process of evolution of species of life. . . . But we do not accept Darwin’s theory. According to Darwin’s theory, homo sapiens came later on, but we see that the most intelligent personality, Brahma, is born first. So according to Vedic knowledge, Darwin or similar mental speculators are rejected so far as the facts are concerned.1

Padma Purana provides an example of the idea of evolving consciousness. This traditional text posits a gradual evolution of souls by transmigration through 8,400,000 different forms of life. This process is generally progressive, although reversals are admitted. Remarkably, the evolutionary succession is given as aquatics, plants, insects and reptiles, birds, beasts, and human beings. . . . This parallels the paleontological succession of marine life, terrestrial plants, insects and amphibians, reptiles, birds, advanced mammals, and finally humans. The parallelism is so close that the modern Vaishnava teacher Bhakivedanta Swami Prabhupada saw the Padma Purana as anticipating Darwin’s theory of evolution.2

How does all of this relate to dashavatara? Evolutionary theory, when viewed from a certain perspective, neatly intersects with the ten incarnations. Man’s origin in the waters is evoked by the pisciform nature of Matsya. Then come the tortoise and the boar, taking us from amphibians to land animals. This is followed by a therianthropic form (Narasimha), and then homo sapiens proper, and so on.3 Eventually we arrive at humans endowed with wealth, values, and spiritual knowledge. In fact, numerous Hindu teachers – and some from the West as well – have noted the correlation.

C. Mackenzie Brown, professor of religion at Trinity University, Texas, writes prodigiously about “avataric evolutionism” – the idea that Vishnu’s ten incarnations anticipated Darwinian evolution. According to Brown, “the late nineteenth-century origins of the theory [are to be found] in the works of Keshub Chunder Sen and Madame Blavatsky.” He also cites Narayana Bhavanrao Pavgee, known as one of the “Vedic fathers of geology,” and Aurobindo Ghose, Indian nationalist turned philosopher, as early proponents of the idea.4

In Vaishnava circles, Bhaktivinoda Thakura (1838–1914), the Bengali reformer and devotional exemplar of the Gaudiya tradition (and one of Keshub Chunder Sen’s schoolmates), was the first to align avatars with evolution, as can be seen in his book Sri Krishna-samhita (Chapter Three, texts 1–11).5 Bhaktivinoda’s son and successor, Bhaktisiddhanta Sarasvati Thakura (1874–1937), elucidated Bhaktivinoda’s thoughts on the subject:

We can notice the different stages of animal life from the invertebrates to the fully-grown human beings. These stages have been classified by the Indian sages of a scientific outlook in ten orders, viz, (1) the invertebrate, (2) testaceous or shelly, (3) vertebrate, (4) erectly vertebrate (as in the combined form of man and beast), (5) mannikin [dwarf], (6) barbaric, (7) civilised, (8) wise, (9) ultra-wise and (10) destructive. These are the historical stages of jivas [souls]. According to the gradation of these stages as indications of evolution of the serving mood of the jiva soul, there are manifested the ten Incarnations of God, viz., Matsya (Fish), Kurma (Turtle), Varaha (Boar), Nrishmha (Man-Lion), Vamana (Dwarf), Parasurama, Rama, Krishna, Buddha and Kalki, as worshipable Deities with eternal transcendental Names, Forms, Attributes and Sports.6

To be clear, Vaishnavas do not accept evolutionary theory as it is commonly understood. Yes, initially the earth was covered with water, and gradually with the emergence of land new species manifest themselves. But the species are not “created” at that time, even if the bodies gradually arise according to necessity. As Srila Prabhupada says, “The species already exist, and the living entity simply transfers himself from one womb to the next, just as a man transfers himself from one apartment to another. Suppose a person comes from a lower-class apartment to a first-class apartment. The person is the same, but now, according to his capacity for payment – according to his karma – he is able to occupy a higher-class apartment. Evolution does not mean physical development, but development of consciousness.”7

Thus the teachings of Vaishnavism, even though sometimes framed in terms of evolutionary discourse, as seen above, are distinct from the modern scientific perspective, stressing evolution of consciousness and not the emergence of bodies or species arising from each other. Instead, Vaishnavism teaches that one transmigrates through the species according to an inner development (or regression) of consciousness, not through a biophysical evolution. The Lord, in His compassion, then incarnates in these species as well, just to sanctify all life forms for the purpose of spiritual elevation. This is the esoteric meaning of dashavatara in a nutshell.

3 Although dashavatara is sometimes presented in terms of evolution, the Puranas inform us that, at the dawn of cosmic creation, the fish incarnation was not alone, but rather He was accompanied by humans, plants, animals, sages, the Vedas, and so on, making this theory incompatible with the understanding of evolution as we know it today.

5 See Bhaktivinoda Thakura, Sri Krishna-samhita, trans., Bhumipati Dasa (New Delhi: Vrajraj Press, 1998), pp. 87–89. The book was originally published in 1880, making Bhaktivinoda’s articulation of the theory contemporaneous with that of the Theosophists and Keshub Chunder Sen, often seen as its originators. Others associate the idea with the famous scientist J. B. S. Haldane (1892–1964), but he would have expressed his notions about the subject a little later than the others. And I could not find any substantial evidence indicating that he wrote about it at all.

6 This expression of dashavatara in relation to evolution comes from a conversation between Bhaktisiddhanta Sarasvati Thakura and Albert E. Suthers (1887–1984), who was affiliated with the history of religions department at Ohio Wesleyan University. Their discussion originally appeared in the January 1929 issue of The Harmonist (Sree Sajjanatoshani). See Rupa Vilasa Dasa, A Ray of Vishnu (Washington, Ms., New Jaipur Press, 1988), p. 99.

Satyaraja Dasa, a disciple of Srila Prabhupada, is a BTG associate editor and founding editor of the Journal of Vaishnava Studies. He has written more than thirty books on Krishna consciousness and lives near New York City.