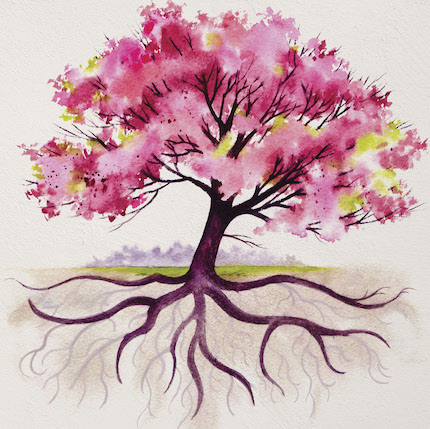 Botanical metaphors are often used to convey the philosophy of Krishna consciousness. For example, Sri Chaitanya Mahaprabhu – Krishna Himself in the guise of His own devotee – explained how a spiritual “seed” planted in a person’s heart by a qualified guru can grow into a vine of devotional service that ultimately produces the most valuable fruit of pure love for God. He called it the bhakti-lata-bija, or “the seed of the vine of devotion.” Mahaprabhu Himself is known as the gardener of that vine.

In this article I’ll focus on a similar metaphor of a plant that grows in the rich soil of Krishna consciousness and blossoms into the ultimate goal of human life. That metaphor, which summarizes the whole of Sri Chaitanya’s teachings, was developed by the high-yielding pen of Bhaktivinoda Thakura (1838–1914), a prominent spiritual master in the Gaudiya Vaishnava line. He called his bullet-points summary of Mahaprabhu’s philosophy dasha-mula-tattva, meaning ten (dasha) roots (mula) of truth (tattva). The term dasha-mula is used in Ayurvedic medicine to refer to a group of ten plants used for healing various diseases. Bhaktivinoda’s play on words is apropos, for he sees the ten roots of his dasha-mula-tattva as fully curing the disease of material life, as it encapsulates Mahaprabhu’s entire philosophy in terms of sambandha (knowledge of God, His energy, and the relationship between them), abhidheya (activities according to that knowledge) and prayojana (the ultimate goal of life, achieved by such activities).

Here are Vaishnavism’s “ten roots” as envisioned by Bhaktivinoda Thakura:

1. The Vedas constitute the principal scriptural evidence for ascertaining the Truth, and in their essence they expound the following nine principles:
2. Hari (Krishna) is the Supreme Absolute Truth.
3. He possesses all energies, material and spiritual.
4. He is the ocean of rasa(the flavors of transcendental relationships).
5. The living entities (jivas) are His separated parts.
6. These living entities, due to being minute, can become conditioned by the material energy.
7. In their liberated state, the living entities are free of the influence of material nature.
8. Everything is inconceivably one with (abheda) and different from (bheda) the Supreme Lord, Sri Hari.
9. Pure devotional service (bhakti) is the highest duty (dharma) for all living beings.,br> 10. Pure love of Krishna (prema) is the ultimate goal of life.

These ten roots are like sutras, or pithy verses, and they summarize the length and breadth of Vedic knowledge. Fully unpacking them is beyond the scope of this article, but even by briefly viewing them and contemplating their meaning, one can gain entrance into the mysteries of transcendental knowledge.

In composing his dasha-mula-tattva, Bhaktivinoda clearly drew on summaries written by his predecessors, adapting the material according to his own realization. Perhaps the earliest sutra-like summary of Chaitanya Mahaprabhu’s teachings is found in the work of Srinatha Chakravarti, who wrote in the sixteenth century. He is the guru of the more well-known author Kavi Karnapura. In Srinatha’s commentary on the Srimad Bhagavatam, called Chaitanya-mata-mañjusha, he offers the following five points in his introductory verse:

1. Vrajendranandana (Krishna), the son of the king of Vraja, is the highest object of worship.
2. His home, Vrindavan, is the highest realm, and it is also worshipable.
3. The most beautiful type of worship (upasana) is found in the damsels of Vraja (the gopis).
4. The Bhagavatam is to be considered spotless evidence.
5. Prema is the greatest of all human goals.

The verse ends as follows: “This is the verdict of Sri Chaitanya, and we thus offer it the highest respect.”

Srinatha Chakravarti’s succinct version expresses the essence of Gaudiya Vaishnavism from an esoteric point of view. He captures the substance of Mahaprabhu’s distinct system of knowledge, which focuses on rasa, or spiritual relationship, and the mood of the gopis, the cowherd girls of Vraja, who love Krishna more than life itself. 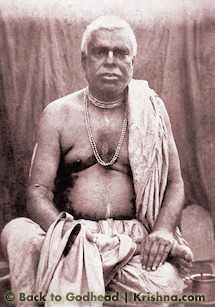 Roughly contemporary with Srinatha Chakravarti was Vyasatirtha (c. 1460–1539), from the Madhva lineage, who composed a similar list:

In the opinion of Madhva:
1. Hari is supreme.2. The world is necessarily real.
3. And differences are real as well.
4. The living entities are constitutionally servants of Vishnu.
5. But they reach distinct destinations according to their activity.
6. Mukti (liberation) is experienced when one knows the self, that knowledge bringing true joy.
7. And uninterrupted bhaktiis how one attains mukti.
8. Perception, inference, and testimony are the fundamental sources of valid knowledge.
9. Hari alone is to be understood from studying the Vedas.

Taken together, the summaries of Srinatha Chakravarti and Vyasatirtha afford a seedlike understanding of Vaishnava truth. While Srinatha focuses on rasa and the essential elements that make the Gaudiya tradition distinct, Vyasatirtha contributes a more philosophical, Vedantic vision, mentioning the nature of the individual soul, reality versus illusion, the importance of liberation, and the standard pramanas (legitimate sources of knowledge), including the Vedas.

Sri Madhva said:
1. Vishnu is the Supreme Person.
2. And He is to be known through the Vedas.
3. The world is real.
4. And living beings are different from the Lord.
5. The living entities are servants of Hari’s feet.
6. And there is gradation among them.
7. Real liberation is the attainment of Vishnu’s feet, and not merging into the Supreme.
8. And His uninterrupted service (bhakti) is how such liberation (mukti) is attained.
9. The traditional triad of proofs, beginning with perception, is to be accepted as valid evidence for achieving reality.
These same truths are also taught by the Personality of Godhead Himself, Sri Krishna Chaitanyachandra [Chaitanya Mahaprabhu].

The influence of all three lists is clear in Bhaktivinoda Thakura’s dasha-mula. He takes the best of all that came before.

The philosophical points delineated in dasha-mula-tattva permeate Bhaktivinoda Thakura’s work. He peppered his considerable literary output with both systematic elaborations and brief references that highlight the importance of the ten points. His earliest mention of them appears in Vaishnava-siddhanta-mala (1888), in which he devotes his first chapter to a series of questions and answers on this theme. Four years later, in 1892, he published Sriman-mahaprabhura-shiksha, which focused exclusively on these ten subjects, and the following year he wrote Jaiva Dharma, considered by many his greatest work (written in the form of a novel). There we find ten chapters (13–22) elaborating on the deep meaning of the ten points.

Briefly, Vrajanatha, the protagonist in Bhaktivinoda’s Jaiva Dharma narrative, submitted himself as a disciple to Babaji Maharaja, a saint in the Gaudiya Vaishnava tradition. Feeling blessed to be in the company of such a knowledgeable Vaishnava, Vrajanatha humbly said, “O great soul, yesterday you told me that you would instruct me on dasha-mula, the fundamental principles of Nimai Pandita’s [Mahaprabhu’s] teachings. Kindly now bestow this knowledge upon me.” When Vrajanatha asked this penetrating question, Jaiva Dharma relates, Babaji Maharaja became jubilant and immediately began explaining the ten ontological truths of dasha-mula. He began his discussion by elaborating on the first verse, which sets up the principle of pramana, valid evidence, especially in terms of studying the Vedas:

Svayam Bhagavan Sri Gaurangadeva has herein instructed ten distinct tattvas (fundamental truths) to the faithful souls of this world. The first of these is pramana-tattva, and the remaining nine are prameya tattva. First you should understand the meaning of pramana. That subject which is established by pramana (evidence or proof) is known as prameya (that which is proved); and that by which prameya is proved is known as pramana.

These ten fundamental tattvas (dasha-mula-tattva) are set out in the shloka that I have just recited. The next shloka will be the first actual shloka of the Dasha-mula, and it elaborates on the first of the dasha-mula-tattvas, namely the authoritative Vedic literature (amnaya or pramana-tattva). From the second to the eighth shloka sambandha-tattva is described. The ninth shloka describes abhidheya-tattva, which is the sadhana for attaining the ultimate goal; and the tenth shloka describes prayojana-tattva, which is the sadhya (goal) itself. [Bhaktivinoda Thakura, Jaiva Dharma: Our Eternal Nature, trans., Narayana Goswami Maharaja (Gaudiya Vedanta Publications; 2014), Chapter 13.]

After this, Jaiva Dharma extensively elaborates on the ten truths.

Then, in 1896, the year of Srila Prabhupada’s birth, Bhaktivinoda completed 104 Sanskrit verses describing Sri Chaitanya’s most important activities and teachings. He called the work Sri Gauranga-lila-smarana-mangala-stotram. Included in its pages was a now famous English introduction, “Sri Chaitanya Mahaprabhu: His Life and Precepts,” which he published separately and sent to several Western universities in an early attempt to bring Krishna consciousness to the West. The introduction focused on the ten points as the essence of Sri Chaitanya’s teachings. Finally, in 1900, Bhaktivinoda published Harinama-cintamani, where he devoted his entire seventh chapter to the ten points.

The Essence of Vedic Knowlege

These ten truths, Bhaktivinoda tells us, are at the core of reality and constitute the sum and substance of Vedic knowledge. To make this clear, in addition to all his specific writing on these ten truths, he composed four essays on these basic principles as found in the Upanishads, Bhagavad-gita, Srimad-Bhagavatam, and Chaitanya-charitamrita, the central texts of Gaudiya Vaishnavism. He selected important verses describing each principle and gave his own translation with commentary to elaborate on it.

These four essays remained unpublished for many years until they were discovered by disciples of Srila Bhaktisiddhanta Sarasvati Thakura (Bhaktivinoda’s son and the spiritual master of Srila Prabhupada). On the Thakura’s appearance day in 1941, his long-awaited essays were finally released as a small Bengali book that was received enthusiastically by the Gaudiya Vaishnava community. Recently, ISKCON’s Brijbasi Dasa (Kostyantyn Perun) translated this work into English for the first time. In this way the rich tradition of dasha-mula-tattva continues into the present day for the benefit of all humanity.

The author would like to thank Brijbasi Dasa for the fruits of his research. See Brijbasi Dasa (Kostyantyn Perun), “Dasha Mula: The Ten Fundamental Truths,” in Journal of Vaishnava Studies 23.1 (Fall 2014), 205–229.