As Sita Devi’s example shows, good judgment must inform our desire to do the right thing.

Ravana’s exploitation of Sita’s service attitude shows how, if we are naive, our virtues can be used against us. 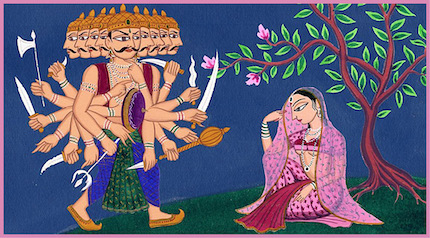 Few things cause us as much agony as when our good intentions backfire on us. When we try to do something good for someone but that very person exploits our goodness and hurts us, we feel betrayed, enraged, shattered.

Such was the situation that led to the abduction of Sita Devi. While she was living in a forest cottage with Lord Ramachandra and His brother Lakshmana, she became the victim of a conspiracy hatched by the demon-king Ravana. With the aid of the shape-changing wizard Marica, Ravana had Sita’s two protectors sidetracked. Then he approached her in a garb that would lower her guard: the garb of a sadhu. By asking Sita for alms in that garb, he cynically exploited her service attitude and her respect for sages.

When Sita saw a sage asking for alms, she folded her hands in respect and said, “O venerable one, please take a seat on this log. My husband will soon return and offer you food.”

Ravana replied, “O fair lady, I am hungry. Please give me whatever alms you have right away.”

Sita had been warned by Lakshmana, “Don’t go out of this protective circle I am drawing around the cottage.”

He had infused the circle with mystical power so that anyone who tried to step over it would be burnt.

Impatient Ravana tried to step over the circle and was immediately scalded by flames. Stepping back in alarm, he paused and decided to exploit Sita’s tender sensibilities.

“Will you let a sage die of hunger? If you don’t step out and serve me some food, I’ll leave, and you will have offended a sage. Do you want to do that?”

In traditional dharmic cultures, offending a sage was among the worst things one could do; it could lead to severe reactions. Virtuous people were trained to respect sages and avoid offending them at all costs. Naturally, Sita became apprehensive on hearing the sage’s words. Thinking, “I can’t become the cause of Rama’s having to suffer the reactions of offending a sage,” she stepped across the protective circle. And Ravana pounced on her and abducted her.

Ravana played ugly. Suppose two boxers are engaged in a boxing match. If one of them plays according to the rules and the other plays loose with the rules, then the rule-abiding nature of the first boxer makes him vulnerable to his opponents’ dirty tricks. A referee is meant to catch anyone who breaks the rules. And in the game of life, the law of karma acts as a referee, giving everyone their due, but often karma gives people their due in its own time. In the meantime, we might suffer at the hands of unprincipled opponents if they are manipulative and we are naive. If a player is known to be unprincipled and cunningly cheats behind the referee’s back, then the opponent needs to carefully guard against such tricks.

And what makes us especially vulnerable to such manipulation is our vices. If we have vices such as lust or greed, we can be easily manipulated by those who promise to gratify our base desires. We are all fighting a war against the forces of illusion, which try to delude, degrade, and destroy us. In this war our vices are like enemy strongholds inside our consciousness. If we don’t want to be sabotaged from within, we need to be cautious about not pandering to our vices. Fostering such cautiousness, the Vedic literature contains many directives and narratives about how dangerous even a minor pandering to vices can be.

But what we often overlook is that we may be vulnerable because of our virtues too. When we act virtuously, we usually expect to be appreciated, not manipulated. Even if we are not ego-driven, we expect that our good actions will produce good results for us and for others. But the world is a cruel place – it can take advantage of our goodness. It is good if we are charitable, but if we give charity indiscriminately, then people may exploit us by milking us for money. We may end up poor, with our wealth being exploited and abused by those who abused our charitable nature.

When Good Intentions Are Not Good Enough

Sita’s virtue that made her vulnerable was her uncritical service attitude, a desire to serve not regulated by caution. To understand how something as noble as a desire to serve can backfire, let’s consider a medical metaphor.

Suppose a doctor is treating patients in an epidemic area. She may have the best of intentions to treat the patients, but if she gets infected, then she can’t help anyone. In fact, care-givers who could have helped the patients will have to spend their time and energy in caring for the doctor. Lack of caution on the doctor’s part ends up reducing a giver of help to a needer of help. No matter how urgent the patients’ needs are, the doctor must first get the necessary protection such as vaccines or masks. A doctor who doesn’t temper compassion with caution won’t be able to show any compassion in the future.

Similar was Sita’s situation. Her service attitude was laudable. Still, it was important for her to remember that she was alone in a dangerous forest, and that danger could come from the most unexpected of places. Not so long ago, she had the experience of danger coming from unexpected places. While she and Lord Rama had been in the seeming safety and prosperity of Ayodhya, Rama’s stepmother Kaikeyi had suddenly turned inimical and had them exiled. In the light of that experience and in the context of her present vulnerable situation in the forest, for her to step over the protective circle was inadvisable, even if it was for serving a sage.

Of course, the point here is not to blame Sita. “Victim blaming” is reprehensible. Those who exploit and abuse others need to be condemned and punished in the strongest possible way. And Rama did just that by ending Ravana’s reign and life. Sita’s abduction was because of Ravana’s viciousness and deviousness.

Simultaneously and regrettably, the world will always have vicious and devious people. Law enforcers need to regulate and, when necessary, even eliminate such evil elements. Still, some other people will become evil. Evil people can’t be entirely eradicated from society; that’s why virtuous people need to be cautious.

For example, the police have the duty to prevent robbery. But some people will still be looking for an opportunity to rob. A wealthy man walking along a lonely, dark street with a lot of currency notes bulging out of his pocket is likely to be mugged. Suppose he is on that dark street on a mission of compassion – say, to give money in charity for the treatment of a poor person on the verge of death. Still, a mission of compassion doesn’t alter the disposition of those without compassion. Robbers will still rob. And when that charitable person is robbed, the culpability lies with the robbers. The police need to catch the robbers, punish them, and recover the money. Simultaneously, the police would advise the kindhearted man to not walk again on that street with so much money showing so visibly.

The point to learn from Sita’s abduction is that just being good is not good enough; we need to be good and shrewd. Here I use “shrewd” in its positive sense of having a clever awareness or resourcefulness, especially in practical matters, not in its negative sense of being disposed to artful and cunning practices. If we aren’t shrewd enough to make sound judgments, good actions can lead to bad results.

When we learn to complement good engagement with good judgment, our good intentions are more likely to be translated into good results.

When Sita was abducted, multiple factors contributed to that tragedy: Ravana’s conspiracy to send Marica in the form of a deer, thereby getting Rama out of the picture; the confrontation between Sita and Lakshmana, which resulted in Lakshmana’s departing to aid Rama, leaving Sita defenseless; Ravana’s assumption of the garb of a holy man; and Sita’s stepping over the protective circle.

Among these factors, Sita’s stepping over was the tipping point. Again, the aim here is not to blame her, but to understand what we can do to prevent unnecessary problems in our life. There is enough unavoidable trouble in life; if we can ensure that we don’t compound it with avoidable trouble, we can go through our life with less trauma and tragedy.

We can compare the protective circle drawn around the hermitage to the regulatory guidelines given in scripture. Lakshmana can be compared to the guru who provides us scriptural guidelines that can best protect us. Sita can be compared to the soul prone to be overpowered by demonic forces, represented by Ravana. If we respect the boundaries that are meant to protect us, we are more likely to be safe.

While danger exists everywhere in the world, it is more in some places than others. Consider walking on a road. On the footpath we may be hit by a drunk driver, but if we are walking in the middle of the road without considering the vehicles, we are much more likely to be hit. The traffic rules that regulate walking on the streets are meant to protect us. If we respect the rules meant to protect us, we stay protected. The same applies to ethical and spiritual guidelines. Indeed, this is the mood of a celebrated aphorism from the Mahabharata: dharmo rakshati rakshitah, “Those who protect dharma are protected by dharma.” Echoing this theme, Lord Krishna states in the Bhagavad-gita (16.24) that if we mold our lives according to the guidance of scripture, we can create a better future for ourselves.

Apart from the standard ethical and spiritual guidelines given in scripture, we can consider what boundaries we require, given our particular vulnerabilities. First we need to recognize the need for boundaries, then we need to construct them, and then we need to respect them. For example, an essential boundary for a recovering alcoholic would be “Don’t go to a bar, and don’t keep alcohol readily accessible.”

Boundaries to avoid bad things are easy to understand, but boundaries in doing good things require more contemplation to understand. For example, suppose we are euphoric and promise something to someone. Our euphoria may cloud our judgment and make us do things we later regret. That’s what happened to Dasharatha when in the joy of Rama’s upcoming coronation, he promised Kaikeyi that he would fulfill any desire she had. When she asked that Rama be exiled and her son, Bharata, be installed instead, Dasharatha was left shocked and shattered.

Ultimately, boundaries are most effective not when they restrict, but when they connect. Put another way, we can best stay within boundaries when we find something so relishable inside the boundaries that we no longer crave what lies outside them. And if the boundaries help us connect more with what lies inside them, that’s even better. If a couple is happily married, then the boundaries of marriage help them connect better with each other and don’t seem restrictive.

The same principle applies to our eternal bond as souls with the supreme soul. Various ethical and spiritual guidelines are ultimately meant to help us become better connected with the Lord. As He is the source of all pleasure, connecting with Him devotionally enables us to access the supreme pleasure. When we thus find inner fulfillment in our connection with the Lord, we don’t feel inclined to transgress any protective boundaries, for we no longer crave the things that lie outside them.