At Home in Jagannatha Puri Dhama

At Home in Jagannatha Puri Dhama

A devotee from America recalls her life and thoughts while living in one of India’s holiest cities.

“Lord Jagannatha walked right over me!”

When my husband and I first visited Jagannatha Puri we stayed on the beach at the Shankar Hotel. The owners were friendly and very pleased to tell us they knew other ISKCON devotees. The Shankar is in Chakra-tirtha, on the east side of Puri, where many tourists are drawn to vacation. Europeans and Russians flock to Jagannatha Puri to take advantage of an inexpensive holiday in a quaint beach town, not understanding it to be a sacred place. 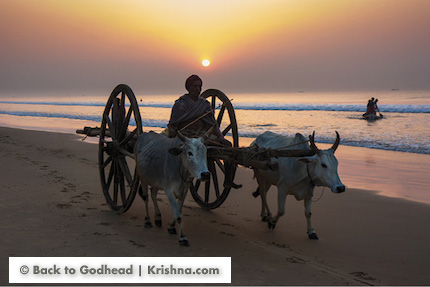 We began to visit Puri every year in the winter. Quickly, attachment to long japa walks on the beach, roaming cows, and Lord Jagannatha, whose presence was manifest in all aspects of life, grew and we were feeling more and more at home in this holy dhama. We had lived in Vrindavana for eight years and Mayapur four years, but the intensity of living in the dhama seemed to ease under the loving smile and magnanimous gaze of Lord Jagannatha.

ISKCON owned twenty-five acres one hundred yards from the beach and another five directly on the coast. When a group of devotees became excited to develop a project there, we were happy to become part of it. The organizers of the project drew up a master plan, and five acres in the back which included a beautiful coconut garden were designated for devotees to build their homes. We distributed Srila Prabhupada’s books and worked in the USA for several years, my mother gave us a donation and we sold our apartment in Mayapur. Now with enough funds we were able to build a house in the newly founded Puri project.

The land was divided into parcels and leased to devotees from all over the world. Our house was in the middle of these parcels directly in back of the coconut garden. Every year we traveled to America to work during the Christmas season, and with that financial base we maintained ourselves in Lord Jagannatha’s holy dhama. We continued doing this for twenty-two years.

Cows often wandered ISKCON’s property, strolling to the back where several devotees had built their homes. In India sometimes cows and bulls walk the streets like mendicants. Understanding the sanctity of the cow, residents and shopkeepers take advantage of this opportunity to serve them by supplying grass, grains and vegetables. Generally bulls, who are more independent, travel alone, but cows, being very social, move in herds. 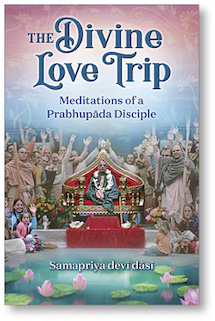 One year, on Govardhana-puja, my husband and I sat on our screened porch facing the coconut grove, shielded from torrents of rain pounding the earth. Through the storm we could still hear the mighty ocean roaring five hundred meters away. The tumultuous winds and rain were mystifying as we celebrated Lord Krishna protecting His cows and devotees from the wrath of Indra five thousands years earlier.

As we sat enchanted by the raging deluge, we noticed several cows passing by just outside our boundary wall. They were en route for shelter at Vaiyasaki’s unfinished house. Our dear god-brother had been enthusiastic to begin building, but unforeseen circumstances had forced him to desist. The skeleton of his house – roof, inner walls, and openings for windows and doors – had long since become a lodging for cows, monkeys, and other forest animals.

On that Govardhana-puja day the rains were exceptionally heavy and there seemed like an endless stream of cows and bulls filing past our porch seeking shelter at Vaiyasaki’s house. Every day at least five or ten cows meandered to the back end of the ISKCON land where our house stood to feast on the vegetable cuttings we saved for them. After receiving alms, they’d sit for hours chewing their cud and finally falling asleep in the shade of the tall trees. But this Govardhana-puja was a site to behold! Literally hundreds of cows lined in a row, climbed the steps to Vaiyasaki’s unfinished kirtana hall, and huddled together sheltered from the rain waiting out the storm. This extraordinary sight serendipitously resembled the enactment of Lord Krishna’s Govardhana lila five thousand years ago as He lifted Govardhana Hill, providing shelter for the cows and residents of Vrindavana. During that torrential thunderstorm in Lord Jagannatha’s holy dhama, Sri Krishna also gave shelter to His beloved cows in Vaiyasaki’s half-built house.

In the purport to Bhagavad-gita 14.16, Srila Prabhupada writes:

Dust From the Feet of Lord Jagannatha

During the Ratha-yatra festival in Jagannatha Puri the three majestic chariots of Lord Jagannatha, Lord Baladeva, and Lady Subhadra sparkle in the sunshine as They stand outside the temple waiting for the Lords to board them. The newly painted carts are adorned with a myriad of flower garlands, camaras, bells and priests.

Preparations for Lord Jagannatha’s Ratha-yatra begin months in advance, and every year new chariots are built for the Lord’s transcendental journey. Mounds of wood collected for their construction are piled on both sides of Grand Road, where the service of building the chariots is performed. These chariots are handcrafted by artisans whose families have performed the same service to the Lord for thousands of years. 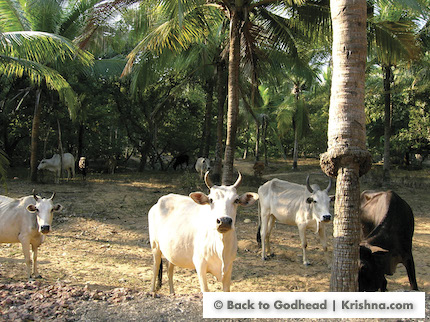 On the day of the festival a very long, thick rope is held firmly in the hands of designated police officers. They proudly surround and protect the three regal carts, creating a cordon, as the crowd waits for the Lord to leave His temple. We became friends with the King of Puri, a graduate from Northwestern University in Chicago, and he was pleased to give us VIP passes inside the cordon. This was a great honor, and those passes allowed us to move freely within a secure area encircled by a million people.

Multitudes of enthusiastic pilgrims travel hundreds miles to witness the Lords’ ascension onto Their Ratha-yatra carts. There are seats on rooftops and balconies placed under cloth canopies for thousands of devotees. From those precious seats the public can view Lord Jagannatha and His divine brother and sister leave the temple to board Their chariots. Inside the cordon we too could see the grand forms of the Lords as They rocked back and forth, Their elaborate flower crowns swaying rhythmically. This progressive step-by-step walk of the Lord assisted by His servants is called pahandi.

Finally, the Lord and His servants arrive at the long, steep ramp that leads to the elevated throne on Lord Jagannatha’s dazzling chariot. It’s not easy to escort the massive form of Lord Jagannatha up the wooden planks. The Deity is pushed and pulled by His devotees, who bellow sounds of hard labor mixed with devotional pride and ecstasy, honored to be serving the Supreme Personality of Godhead in such intimacy.

All the residents of Puri are proud of the individual services they perform for the Lord’s pleasure. These services stem from centuries-old family traditions. Some families perform service daily and others only on special occasions, but hundreds of the Lord’s servants are engaged during the Ratha-yatra festival – carving the chariot wheels or building the carts or sewing flags or painting exquisite images and designs on the bodies of the carts, and, of course, cooking the offerings. Everyone honors their particular service as the most important activity of their lives.

As Lord Jagannatha was being rocked up the ramp by His devoted servants, I stood at a distance and appreciated how Lord Chaitanya and His associates witnessed the same pahandi ceremony in this sacred place five hundred years earlier. While the Lord and His party steadily ascended, I noticed an opening under the ramp. If I stood up straight and tall, I could easily push my head under the ramp and then there would only be inches between Lord Jagannatha’s lotus feet and my head. This was a unique opportunity in the span of eternity, and I could not let it pass. I knew if I moved too quickly, other enthusiastic devotees would notice and this would make it impossible for me to strategically situate myself to receive the Lord’s mercy. 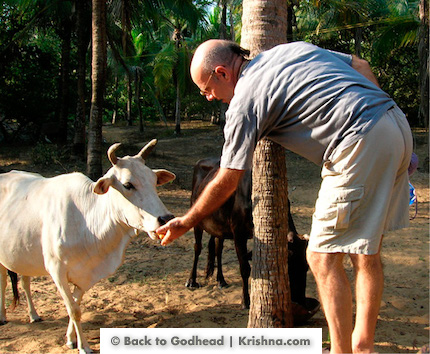 So, I moved slowly and strolled nonchalantly under the ramp. No one knew why I was there; no one cared. As the Lord proceeded to climb, I pushed my head up until it touched the underside of the ramp. Lord Jagannatha walked right over me! Sacred dust from His lotus feet fell between the wooden planks and onto my head. It didn’t take long for others to notice what I was doing, though, and suddenly the entire area beneath the ramp was filled with pilgrims who wanted their own share of the sacred dust. 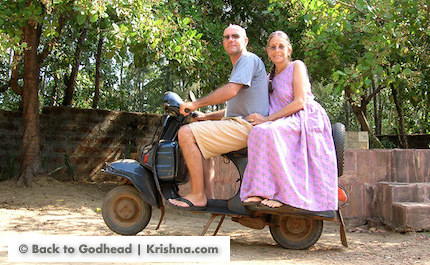 Lord Jagannatha weighs at least two tons, and it is very rare for Him to step on someone’s head. Somehow by the Lord’s causeless mercy He placed His lotus feet on my head, and I live to tell the tale. All glories to the Lord of the universe! He gives His blessings to those who have no other shelter in the world but Him.