Though insulted by a king, Jada Bharata reacted coolly, blessing the king with spiritual instruction.

“A person in command of his mind, continuously focused on the goal of his life, will not succumb to pride or the whims of others.”

“Sociologists tell us that even the most introverted person will influence ten thousand people during his or her lifetime.” Motivational speaker Tim Elmore notes a fact that may seem obvious, but of which many of us may not be conscious: Everyone has some effect on the minds and hearts of the people he contacts. An introspective person will ponder, “If I will end up influencing many people regardless of whether or not I try, why not seek to refine my consciousness so that I can have the best and most lasting impact upon those whose lives I touch?” 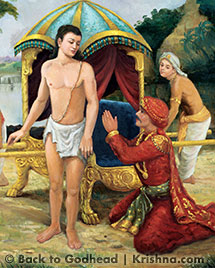 Let’s take a situation that most of us wish to avoid, but sometimes cannot. In anger, someone insults me. Now I must make a choice. I can consider whether or not to speak, and, if I’m practiced in self-control, whether or not to express anger myself. Of course, if I have not elevated myself by developing self-control, I am forced to retaliate and speak harshly in return. The consequence will be an unbalanced state of mind. I forget that I have a responsibility to keep out of dangerous situations that may jeopardize my role as a teacher, student, father, mother, son, daughter, or whatever. I may even descend further to the platform of unbridled anger.

What follows is the suffocating feeling of regret, the price for one who loses control. Regret has the purpose of inspiring rectification. “If I can act in such a base manner, where does it end? How can I change?” One who recognizes his pitiable position as a servant of the lower self is a candidate for cultivating balance. An honest person accepts that he cannot control the emotions and decisions of others but can work on controlling his own mind.

Even if a person is not habitually aggressive or inimical, it is important to remember that anyone in the material atmosphere is liable to slip down to that level. If my instigator has indeed become morally corrupted, that means that his sense of regret or shame has been repeatedly ignored. He has become practiced in ignoring his conscience, the voice that urges him to use higher reasoning. The Supersoul, or indwelling guide, has allowed this stubborn person to become callous to the situation of others. He may enjoy the “thrill” of fiercely claiming one’s own territory and violently impugning trespassers who pose a threat to his sense of ownership. But such an existence is filled with fear. My responding in a like manner, with blind ferocity, will yield misfortune. However, I may be able to benefit both of us by acting with spiritual intelligence.

The reward for bringing the “pushings” of the mind and forces of anger under control is access to subtler planes of reality. Subtle energy is more powerful than gross energy. For example, laser technology is more precise and powerful than knives. A poem may be able to convey a more powerful message than volumes of prose, even more so a Sanskrit sutra, which contains an ocean of wisdom in a mere aphorism. In Sri Chaitanya-charitamrita, Krishnadasa Kaviraja Goswami quotes an aphorism in support of aphorisms: “Essential truth spoken concisely is true eloquence.” In addition, truly eloquent speech is speech that uplifts others, even one’s supposed enemies. The more a person practices subduing the urges coming through the mind, directing his thoughts to higher subjects, the more his consciousness becomes laserlike. Lord Krishna says, “Those who are on this path are resolute in purpose, and their aim is one. O beloved child of the Kurus, the intelligence of those who are irresolute is many-branched.” (Gita 2.41) When a person learns to control himself, he transcends the influence of petty urges for sensual pleasure and egoistic domination.

A person in command of his mind, continuously focused on the goal of his life, will not succumb to pride or the whims of others. As recounted in the Srimad-Bhagavatam, a great king called Rahugana was being carried on a palanquin by several of his servants. At a river they came upon a young, seemingly dull man whom they employed in their service. They posted him under the palanquin in hopes that their work would be alleviated. Unbeknown to them, the man, who has since become known as Jada Bharata (“Dull Bharata”), was a self-realized soul who had equal regard for all forms of life. While carrying the king, the new recruit carefully avoided stepping on any ants or small creatures. Because he couldn’t keep pace with the others, he disturbed the king’s smooth ride.

The king interpreted this errant behavior as negligence born of disobedience and disrespect. He rebuked the new man with insults, threatening severe punishment to correct him. The supposedly dull man then spoke up. He informed the king that his belittling, sarcastic remarks were not untrue, but that they pertain only to the body, an entity separate from the essential spiritual being within. The notion that one soul is master over another soul is incorrect. “Today you are a king and I am your servant, but tomorrow the position may be changed, and you may be my servant and I your master. These are temporary circumstances created by providence.”

Describing the existence of the spirit soul imprisoned within every material body, Jada Bharata replied with the natural humility and composure of a pure bhakta. He said, “You have said that I am not stout and strong, and these words are befitting a person who does not know the distinction between the body and the soul. The body may be fat or thin, but no learned man would say such things of the spirit soul.” Willing to continue the labor for which he had been enlisted, he became silent, expecting neither honor nor dishonor in return for the lesson. Being without pride, Jada Bharata neither faulted the king nor accepted the allegation of his being crazy, but coolly dissipated the ignorance and passion that clouded the consciousness of the king. Then he prepared himself to continue carrying the king’s palanquin, accepting the work as a chance to be relieved of past karma.

Rather than retaliate out of fury, a self-controlled person chooses the path of compassion. He knows that someone acting out of hate has become blind to his own welfare. The deluded soul’s natural divinity is shrouded by decisions made under the enfeebling pressure of the material energy. Everyone is originally glorious. A saint will act to reinstate another person in his own original glory. Behind his tolerance is knowledge of the original beauty of the soul from whom he receives spiteful blows. He responds to hate with compassion. He bases his words on eternal truth.

The need for promoting a culture of self-control is felt when one observes the political situation of the modern world, in which global warfare is an ever-present threat. Advanced nations promoting science and technology as the solution to problems of education, healthcare, and crime foist their own worldview upon those of lesser status. This is done without regard for the traditions and wisdom of the great sages of yore who spread knowledge of God in many parts of the world. The economically and militarily weaker nations are persuaded to accept the idea that new discoveries in science ensure a brighter future, rife with ergonomic comforts and the plentiful fruits of industrial production. To become powerful but remain blind to the spirit ends in despair. As stated by Sri Prahlada:

What is the method to curb the madness of a civilization in which money speaks loudest? Development of character and courage. As Jada Bharata showed by his example, those who are fortunate to have genuine spiritual knowledge must be firmly convinced and emboldened to propagate spiritual truth. They expect no honor in return for their efforts, and are naturally peaceful simply knowing that they are giving satisfaction to the Supreme Lord.

The leaders of the world can bring much greater contentedness among its peoples through simple education in the art of self-control. To this end they might choose to place enlightened followers of the God-conscious way of life in the role of educators. The attempt to balance interests among nations will succeed when the common interest of all men and women is clearly defined ? internal harmony of one’s own thoughts and deeds through dedicated service to God. Who else but the Supreme Person can appreciate the desires, travails, emotions, and longings of every single person? A responsible leader trains his followers in enhancing their faith in the revealed scriptures and in the saintly guides who are experts in self-mastery.

Let us now return to the original situation of being insulted. Here I am, pursuing transcendental life, and an unexpected attack crashes upon my ego. Pricked by thorny words, I am instigated to react. Having cultivated a strong desire to benefit the world of forgotten souls, however, I remember that doing this begins with the one whose hard glare I now face. Before saying anything, I engage my thoughts in begging for tolerance and wisdom. The desire to act in my own defense slackens, and the words of Jada Bharata appear brilliantly in my mind. Now, not only am I able to avoid disaster, but I have the chance to leave a beneficial impression upon the soul who superficially appears as my aggressor.

Srila Prabhupada writes, “It is the duty of the transcendentalist to try strenuously to control desire and anger.” (Gita 5.23, Purport) Those who pursue self-mastery, following the example of great sages such as Jada Bharata, are benefactors of the whole society. The cumulative effect of their self-control can spread through time, opening the minds of those around us, or even those we may yet come to know.