To those exposed to Krishna consciousness, the futility of coping with aging through material adjustments alone is perfectly obvious.

While it seems the majority of old people mainly want comfort, aging devotees have higher aspirations. 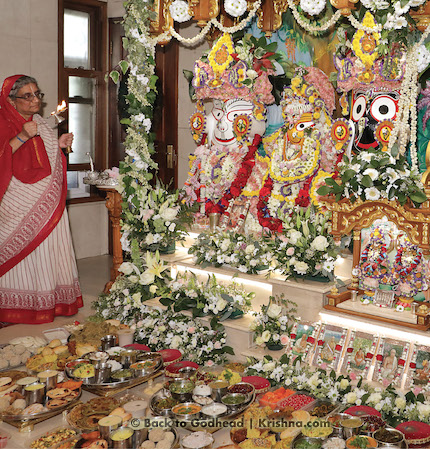 In many developed countries today, retirement communities come with a gamut of material facilities – multiple-cuisine restaurants, parks, emergency-aid facilities, assisted living, even exclusive dog parks. The idea is to make old-age living comfortable, even enjoyable, for the elderly who can afford the price.

In India, where I live, the trend to set up exclusive facilities for “senior living” is catching on. Typically, advertisements show happy elderly couples engaged in outdoor activities in perfectly landscaped surroundings, seemingly without a care in the world.

Increasing average life-expectancy in most countries is one reason for this trend. In countries like India, changes in social and family structures that accompany economic development are another factor. But improvements in material living conditions do not address the basic problems associated with aging. Can redesigning the physical living environment redefine the way we experience aging itself?

To those exposed to Krishna consciousness, the futility of coping with aging through material adjustments alone is perfectly obvious. Srila Prabhupada writes, “Wherever there is the influence of eternal time, there is this set of tribulations, namely birth, disease, old age and death, and all of them are invincible.” (Bhagavatam 1.13.19, Purport) How do devotees of Lord Krishna cope with these problems?

The Hitopadesha gives a hint: A wise person performs religious duties “as if Death had seized him by the hair.” What is true of the wise, regardless of age, will certainly apply to a true practitioner of Krishna consciousness. Like the elephant king Gajendra, each one of us is in the crocodile-like grip of eternal time. (See Bhagavatam, Canto 8, Chapters 2-4.)

While aging does make the inevitability of death more tangible, devotees know that one’s life can end any day without warning. Srila Prabhupada quotes the venerated Canakya Pandita: “The duration of one’s life in the material world may end at any moment, but if within this life one does something worthy, that qualification is depicted in history eternally.” (Bhagavatam 9.13.3, Purport)

Devotional service is what makes a devotee’s life worthwhile, and it is the means by which the devotee wages the constant struggle with maya. This makes it important to stretch one’s ability to continue devotional service into old age. Hence it is enjoined upon devotees to take due care to protect their physical and mental faculties. Srila Prabhupada writes:

[T]he living entity entangled in the illusory energy cannot come out of it without the help of the body. . . . The Vaishnava philosophy therefore recommends yukta-vairagya. It is not that all attention should be diverted for the maintenance of the body, but at the same time one’s bodily maintenance should not be neglected. As long as the body exists one can thoroughly study the Vedic instructions, and thus at the end of life one can achieve perfection. (Bhagavatam 8.19.39, Purport)

And, stressing the mental poise necessary to wage the constant struggle with maya, Srila Prabhupada writes:

[W]e may take the lesson that in our fight with maya we should not be in a position in which our strength, enthusiasm and senses will be unable to fight vigorously. Our Krishna consciousness movement has actually declared war against the illusory energy, in which all the living entities are rotting in a false understanding of civilization. The soldiers in this Krishna consciousness movement must always possess physical strength, enthusiasm and sensual power. To keep themselves fit, they must therefore place themselves in a normal condition of life. (Bhagavatam 8.2.30, Purport)

Aside from physical disabilities, old age predisposes one to increased worries stemming from memories of life’s inevitable mistakes, failures, and disappointments. Consider Dhritarashtra, the head of the Kauravas. His lifelong indulgence of his wicked son Duryodhana in regard to Duryodhana’s repeated misdemeanors landed Dhritarashtra in the most unenviable situation in his old age: Every one of his sons died in battle, and he and his wife were reduced to dependence on their righteous nephew Yudhishthira, whom Duryodhana had sought to destroy at any cost.

Dhritarashtra was eventually guided out of his miserable plight by his half brother Vidura, who tried to intercede with Dhritarashtra on the eve of the Mahabharata war by urging him to make peace with the Pandavas by granting them their share of the kingdom. But Duryodhana, obsessed with destroying his cousins, soundly rebuked Vidura. The deeply offended Vidura left the royal palace forthwith and proceeded to numerous places of pilgrimage, eventually reaching the ashram of Maitreya Ṛshi, who enlightened him on many details of the science of the Absolute Truth.

When Vidura returned to Hastinapura, he confronted Dhritarashtra, pointing out the utter anomaly of his spending his last days dependent on the hospitality of the Pandavas, who were the targets of his acts of enmity. Vidura urged his aged half brother to get out of the palace with the least delay.

Vidura’s words had the desired effect. The course that Dhritarashtra adopted thereafter and the way he ended his life (Bhagavatam 1.13.51–57) reveal that he was well aware of the means to liberate oneself from the material world but delayed to do so owing to spiritual blindness.

Vidura’s experience is relevant to our discussion in another important respect. As Srila Prabhupada points out: “For a saintly person like Vidura, any disturbance due to worldly affairs is insignificant. Such disturbances, however, are sometimes favorable for higher realization, and therefore Vidura took advantage of a family misunderstanding in order to meet Maitreya Ṛshi.” (Bhagavatam 3.1.2, Purport)

The circumstances of Vidura’s setting out on his pilgrimage were certainly unique, but in our times, disturbance to normal conditions of life occur in a variety of ways. For example, one could be diagnosed with a serious ailment, of which there are increased chances in one’s old age. As with Vidura, such disturbances provide a devotee with the opportunity to detach from life’s nonessentials and focus on the main purpose of human existence.

Krishna devotees are particularly well-equipped to do so in that the Srimad-Bhagavatam, which provides the most complete guide to dealing with life’s terminal problems, is integrated into their daily lives.

Consider, for instance, the lessons Srila Prabhupada draws from the life of Svayambhuva Manu:

The existence of material enjoyment can endure as long as life is fresh, but at the fag end of life everything becomes tasteless, and everything appears to be vain and painful. The life of Emperor Svayambhuva Manu, however, was not tasteless; as he grew older, his life remained as fresh as in the beginning because of his continued Krishna consciousness. The life of a man in Krishna consciousness is always fresh.

Manu’s life did not become stale after some time, for he engaged himself always in chanting about and meditating upon Lord Vishnu.  When he talked, he talked only of Krishna and Vishnu, the Personality of Godhead; when he heard something, it was about Krishna; when he meditated, it was upon Krishna and His activities. (Bhagavatam 3.22.35,Purport)

We should emulate Svayambhuva Manu’s example. Normally, a devotee practitioner will share some of Svayambhuva Manu’s attitude, but may also have some of Dhritarashtra’s weaknesses. The course to adopt is thus self-evident. As a devotee advances in age, the need to disengage from family and other attachments gains in urgency. Srila Prabhupada does not mince words in his advice to all devotees, based again on Vidura’s counsel to his half brother: “The system of varnashrama religion sets aside a part of one’s life completely for the purpose of self-realization and attainment of salvation in the human form of life. . . . To stick to family life to the end of one’s human life is the grossest type of degradation, and there is an absolute need for the Viduras to educate such Dhritarashtras, even at the present moment.” (Bhagavatam 1.13.24, Purport)

And on the means to promote detachment: “Constant thought of the Lord is the antiseptic method for keeping oneself free from the infectious contamination of the material qualities.” (Bhagavatam 3.1.32, Purport)

Srila Prabhupada expands on this idea: “It is said that it is the nature of a devotee to constantly apply his mind, energy, words, ears, etc., in hearing and chanting about Krishna. This is called Krishna consciousness, and for one who is rapt in hearing and chanting about Krishna, the subject matter never becomes hackneyed or old. That is the significance of transcendental subject matter in contrast to material subject matter.” (Krishna, the Supreme Personality of Godhead, Chapter 13)

Bombarded as we are by material attractions from all sides, deliberately planning to increase the time we allot to the practice of Krishna consciousness would seem the path for aging devotees to follow. In practical terms, for many this would mean invariably starting the day with mangala-arati at home and regularly offering food to the Lord, which in turn involves a range of activities connected with service to the Lord. For devotees within easy access to a temple, attending the temple programs without fail would meet the same objective.

What about physical and mental disabilities that could impede normal devotional service in old age? Pilgrimages to holy places associated with the Lord could be ruled out in advanced age, and even attending temple programs could be strenuous. But when the aim is to connect as many of one’s activities with Krishna as possible, one can continue devotional services of basic types, such as chanting and hearing. And advances in technology, despite all their negatives, also offer devotees opportunities to follow temple programs from their homes, including listening to temple lectures and kirtanas.

Physical disabilities need not impede devotees’ continuing endeavor to improve their standard of spiritual practice, particularly the quality of their chanting. For a family devoted to Krishna consciousness, mutual support among family members can help smooth the rough passage into old age. And lastly, heeding Prabhupada’s repeated stress on association with fellow devotees can provide the support devotees need in their closing days.