A Small but Profound Preface

A Small but Profound Preface

An appreciation of Srila Prabhupada’s opening words in his presentation of Srimad-Bhagavatam.

Srila Prabhupada introduces his Srimad-Bhagavatam translation and commentary with an appeal to world leaders and thinkers. 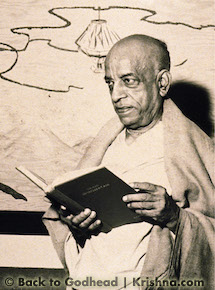 In his preface to Srimad-Bhagavatam, Srila Prabhupada has summarized an ocean of wisdom in just a few words. The Bhagavatam, with over eighteen thousand Sanskrit verses, is a masterpiece of knowledge for the benefit of humanity. Srila Prabhupada undertook the monumental task of translating the text into English and adding his own commentary (“purports”), and his edition now appears in more than eighty languages. Scholars have opined that among Srila Prabhupada’s many gifts to humanity, this literary contribution is especially noteworthy.

Often an author writes a preface to provide the intended audience a glimpse of the aim and scope of the book. One can imagine the seriousness with which Srila Prabhupada would introduce his English translation of the Bhagavatam. The result is that every statement of his short but profound preface is food for contemplation. The aim of this article is to discuss and deliberate on parts of it. We shall discover the Bhagavatam’s strong relevance to present-day humanity – collectively and individually.

Srila Prabhupada wrote this preface when he was unknown to the world. But his visionary character can be clearly seen in his words, written as early as in 1963, when people thought of him as just another ordinary swami. He arduously managed to complete three volumes of the Bhagavatam, and then set sail to America to preach its gospel.

Today we live in a world where all parts of the earth are interconnected economically, socially, and culturally, and thinkers are searching for a common ideology to bind society harmoniously. Diversity is natural when people of different nations mix, yet leaders are aspiring to achieve unity in diversity. It is a noble idea, but a formidable one to enact in practice. Various social scientists, anthropologists, economists, educators, political leaders, reformers, artists, and scientists are busy trying to make unification of humanity a reality. We can see their efforts in the establishment of worldwide institutions. Srila Prabhupada envisioned that the need for unification would be inevitable. Consequently he stated his premise that the Bhagavatam is a literature that can help leaders achieve their goal.

In other places, he has explained what he means by “spiritual communism,” or the communism of the Bhagavatam:

Furthermore, Bhagavata communism is not limited to humanity. It cares for all living beings. It is an all-inclusive welfare scheme.

Bhagavata communism says that even if you have got a lizard in your room, you must give him something to eat. If you have got a serpent in your room, you must give it something to eat. Nobody in your house should starve. You see? This is Bhagavata communism. Not that “Only my brother and sister will not starve, and other animals should be killed.” This is not communism. Here is communism. This is Krishna consciousness communism – that a Krishna conscious person is thinking even for the ant, even for the lizard, even for the serpent. That is real communism. (Lecture, March 6, 1968, San Francisco)

The opening paragraph of the preface is a call for revolution – a spiritual revolution based on the Bhagavatam, a revolution for a universal welfare state with all inhabitants happy.

Human society, at the present moment, is not in the darkness of oblivion. It has made rapid progress in the fields of material comforts, education and economic development throughout the entire world. But there is a pinprick somewhere in the social body at large, and therefore there are large-scale quarrels, even over less important issues. There is need of a clue as to how humanity can become one in peace, friendship and prosperity with a common cause. Srimad-Bhagavatam will fill this need, for it is a cultural presentation for the respiritualization of the entire human society.

Why should one bother to adopt spiritual communism from the Bhagavatam? Here is the reason. Srila Prabhupada says that despite rapid progress, a pinprick in the society at large is leading to big quarrels over less important issues. Modern wars are exploitative, selfishly driven by vested interests. Further, with rapid growth in almost all fields of life, we take pride in our social evolution. But we should pause and honestly ask, Are we really happy as a society? Are we united? Border problems, ethnic conflicts, resource conflicts, terrorism in the name of God, economic collapse, environmental problems, scandals, war tensions, communal disharmony, hundreds of diseases, suicides – shouldn’t this state of affairs prompt us to question the very philosophy underlying our growth? We’ve built a skyscraper on a shaky foundation. What is that foundation, that fake premise on which society rests? A diagnosis of the problem is needed before a suitable cure is thought of. Leaders are struggling without knowing the clue to how humanity can become one in “peace, friendship and prosperity.” Srila Prabhupada urges them to refer to the Bhagavatam for the clue.

Here is the diagnosis of the problem. Society is now based on godlessness, on materialistic principles. Materialism has primarily two faces. One face is the belief that there is no God and no spirit and that matter is all there is –matter, not spirit, is the source of consciousness. The other face is the belief that matter alone, by chance or accident, caused everything we perceive. Materialism is the philosophy of most leaders today, coloring their view the world. Consequently all their plans are based on this premise, and the result is there for us to see. Materialism is simply not working. The Bhagavatam teaches us that besides matter there is spirit and only an integrated worldview can solve the present-day problems. Leaders should take note of this.

Of course, this viewpoint is not just from the Bhagavatam, but from many other Vedic scriptures as well as scriptures of the Abrahamic traditions. What then is the special contribution of the Bhagavatam? The following verses hint at the Bhagavatam’s uniqueness among other religious texts:

Completely rejecting all religious activities which are materially motivated, this Bhagavata Purana propounds the highest truth, which is understandable by those devotees who are fully pure in heart. The highest truth is reality distinguished from illusion for the welfare of all. Such truth uproots the threefold miseries. This beautiful Bhagavatam, compiled by the great sage Vyasadeva [in his maturity], is sufficient in itself for God realization. What is the need of any other scripture? As soon as one attentively and submissively hears the message of Bhagavatam, by this culture of knowledge the Supreme Lord is established within his heart.

O expert and thoughtful men, relish Srimad-Bhagavatam, the mature fruit of the desire tree of Vedic literatures. It emanated from the lips of Sri Shukadeva Goswami. Therefore this fruit has become even more tasteful, although its nectarean juice was already relishable for all, including liberated souls. (Srimad-Bhagavatam 1.1.2–3)

These early verses of the Bhagavatam warrant an open-minded reception. Atheists and materialists criticize the hypocrisy of supposedly religious people who do bad things in the name of God. Actually, their criticism is right. But the Bhagavatam and followers of its true message shun materially motivated religious practices, and this should encourage critical readers to appreciate its nonduplicity.

Are there guidelines for studying the Bhagavatam? From the preface:

The only qualification one needs to study this great book of transcendental knowledge is to proceed step by step cautiously and not jump forward haphazardly as with an ordinary book. It should be gone through chapter by chapter, one after another. The reading matter is so arranged with the original Sanskrit text, its English transliteration, synonyms, translation and purports so that one is sure to become a God-realized soul at the end of finishing the first nine cantos.

The Bhagavatam has twelve cantos, and Srila Prabhupada generally recommended that one read it in order. Reading elaborate commentary requires patience and interest. The reader can consult ISKCON leaders and teachers about how to study the Bhagavatam. Whichever way we do it, a committed, disciplined reading will help us.

In my last excerpt from the preface, Prabhupada mentions becoming a self-realized soul after reading nine (of the twelve) cantos. Why nine? From the preface:

The Tenth Canto is distinct from the first nine cantos because it deals directly with the transcendental activities of the Personality of Godhead, Sri Krishna. One will be unable to capture the effects of the Tenth Canto without going through the first nine cantos. The book is complete in twelve cantos, each independent, but it is good for all to read them in small installments one after another.

Srila Prabhupada concludes the preface by admitting his frailties in writing his commentary but expressing hope that leaders will give the book a good reception. He then quotes a beautiful verse from the Bhagavatam (1.5.11):

“On the other hand, that literature which is full of descriptions of the transcendental glories of the name, fame, form and pastimes of the unlimited Supreme Lord is a transcendental creation meant for bringing about a revolution in the impious life of a misdirected civilization. Such transcendental literature, even though irregularly composed, is heard, sung and accepted by purified men who are thoroughly honest.”

Srila Prabhupada’s mention of his frailties reveals his humility, but a person of his character and stature cannot err in his presentation. Nor is it ever inadequate. He ends the preface by quoting a verse (cited above) in which Srila Vyasadeva, the author of the Bhagavatam, shows the same humility.

In fact, the quality of humility finds its ultimate expression and fulfillment in the pages of the Bhagavatam, along with other desirable qualities such as gratitude, love, compassion, integrity, purity, and honesty. These special virtues are innate in every soul, and the Bhagavatam draws them out in their splendid spiritual forms.

All of us yearn for fulfillment, for satisfaction of our heart. Unfortunately our materially guided civilization desensitizes us, and we become stony and cold in relation to other living beings and nature. Materialism dries up the very essence of our compassionate humanity, leaving our soul parched. No wonder that despite much material advancement, a lingering sorrow pervades society. On one level everything may seem fine, but we sense that something somewhere is missing. There’s a pinprick, a constant irritation, in our otherwise soft bed. Where are happiness, peace, and prosperity? They elude us or come and go too quickly, leaving the heart wanting.

It is this vacuum – the sheer hollowness, the ultimate emptiness of a materially guided civilization – that Srila Prabhupada fills with his books and purports. His agenda is only one thing – how to make all living entities on earth happy in Krsna consciousness.

Seeing the Bhagavatam as a panacea, Prabhupada took great pains late in life to write his translations and purports. As Dhruva Maharaja, filled with gratitude, kissed the feet of Lord Vishnu when He appeared before him, and as a sinful prostitute, moved by the compassion of Christ, kissed his feet, the entire humanity should kiss Srila Prabhupada’s hands for his commentary on the Bhagavatam.

We should all read this literature and share it with leaders, urging them to apply the principles of the Bhagavatam in their administrations. Instead of only criticizing them as godless, materialistic, demonic, and atheistic, we can proactively make them God-centered by taking introducing them to Srila Prabhupada’s Bhagavatam and encouraging them to give it the “good reception” that Prabhupada desired.