Desiring to attract people to the realm of bhakti, a writer created a story based on an allegory from the Srimad-Bhagavatam.

A story that happened long ago, is happening now, and will take place in some future time as well.

[Excerpted from Essence Seekers: A Quest Beyond the Forest of Enjoyment, by Urmila Edith Best. Copyright 2018 Padma Inc. All rights reserved. Available from Amazon.com in both print and Kindle editions.] 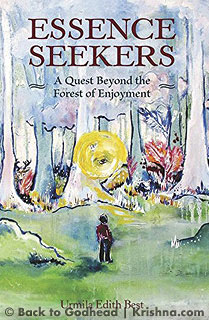 Before we get to the excerpt from Essence Seekers, I’d like to spend a few moments explaining why I wrote the book and what it’s all about.

Where do we find entertainment, ideas, direction, adventure, and comfort? Often it’s in stories. Stories thrill us, intrigue us, scare us, inspire us, and guide us. Whether surrounding the family screen, watching a live performance, or gathering around a storyteller, humans are drawn to narratives.

For thousands of years, great saints and enlightened souls have used not only historical narratives but also fiction to convey spiritual truth and guidance. But in today’s world, most stories – fiction and nonfiction, in movies and books, on television and the Internet – are at best a distraction from the spiritual path. And at worst they fill our minds and hearts with thoughts and desires we then have to struggle to cleanse from our awareness. Furthermore, among the many religious and spiritual stories available, most are filled with inspirational platitudes, or they promote a particular sectarian religion or some vague impersonal idea.

I wanted to write a story that would interest a modern audience while relating, in the personal way that Lord Chaitanya taught, timeless and universal guidance about finding spiritual perfection. In pursuit of that challenge, I gained much inspiration from the medieval text Sri Manah-shiksha (“Splendid Instructions to the Mind”), by Raghunatha Dasa Goswami. The twelve-verse book is full of metaphors begging to form the basis for the kind of story I wanted to write. For example, as a metaphor for speaking of one’s liberation separate from spiritual love, Raghunatha Dasa Goswami wrote of a tigress that threatens to eats us. His analogy for nurturing inner ill motives while serving the Supreme was thinking that a bath in donkey urine is going to get us clean. He compared the process of surrender to the Lord to a bath in an ocean of love.

I felt that Raghunatha Dasa Goswami had written the outline of a narrative – an account of how someone can come to perfection, complete enlightenment. But not just perfection in general. He described very personal perfection in the eternal service of Krishna and His consort – the Divine Couple of the ultimate manifestation of the spiritual world.

Inspired, I sought blessings from advanced devotees of Krishna and started to put fingers to keyboard and expand the metaphors into a narrative – as vendors at a fair turn sugar into cotton candy. But my understanding of Sri Manah- shiksha was superficial, and I faltered. For the first step, then, with the strong encouragement of those who introduced me to Sri Manah-shiksha, I worked with a team of over twenty devotees who helped produce an expanded English version of the original work* – translators, commentators, artists, and editors. Then I traveled the world teaching it over and over until the book became a good friend.

At that point it was time to start the story. But what kind of story? Back to Godhead’s editor in chief, Nagaraja Dasa, suggested to me many years ago that hearing about how people come to Krishna consciousness can have a great impact on readers. And Shivarama Swami had written such a story in fictional form in the back of his book Shuddha-bhakti-chintamani. In Back to Godhead magazine, the stories of people who take up Krishna consciousness are very popular. Furthermore, Sri Manah-shiksha’s metaphors are already arranged as a paddhati, or step-by-step guide. So the story would be a corresponding progression of consciousness.

Sri Manah-shiksha begins at an intermediate level of spiritual progress, however. To be useful to the greatest number of people, the story would need a beginning level as well. In fact, I thought, it may be most useful for a story to start at the very beginning of spiritual life, with a person’s initial curiosity, desire, and conviction that something exists beyond ordinary life. So I considered where I could find metaphors to create a story that would take readers from the start of spiritual life to Sri Manah-shiksha’s intermediate-level first verse.

In the Srimad-Bhagavatam several sections of metaphors describe material life and the urge to transcend it. I chose the description of the Forest of Enjoyment that Jada Bharata, the previously silent and “hidden” perfected soul, gave to King Rahugana. Jada Bharata compares saints to honeybees, a python’s squeeze to sleep, and cannibalistic demons to tax collectors. Some sections of the story I wanted to write went beyond Jada Bharata’s allegory and were only partially represented in Raghunatha Dasa Goswami’s metaphors. For those sections I pulled in metaphors that Lord Chaitanya Mahaprabhu told to His disciple Sanatana Goswami. Mahaprabhu tells of two witches, a crazed elephant, and treasure hidden and guarded. Now the outline was complete. 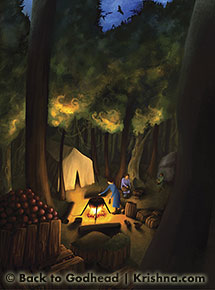 The story’s main character, Avid, at first simply wants to know where his family’s real home is beyond the forest they’re perpetually living in. His question attracts a mysterious being who directs him to find an “otherworldly essence of nectar.” But Avid doesn’t understand the nature of that essence, or how to find it. While his mother yearns for wealth and status, and his brothers and sisters go through betrayal and hope, Avid deepens his desire for a quest beyond the ordinary. To find the essence of life, he and his friends must overcome diversions and pass tests, forcing them to distinguish again and again between appearance and reality, promises and pitfalls.

While serious practitioners of bhakti-yoga naturally find the allegories from the Bhagavatam, Chaitanya-charitamrita, and Sri Manah-shiksha an impetus to deep introspection, the language and narrative of Essence Seekers are accessible to readers unfamiliar with the language and concepts of bhakti-yoga and Krishna consciousness. Srila Prabhupada encouraged us to find novel ways and means, in terms of time and circumstance, to bring people to an awareness of Krishna. Allegories are as old as life itself and are a gentle yet insistent way to transform heart and mind.

Now on to the excerpt, which is one of the book’s introductory chapters.

Really and truly this story was first told very long ago – well, one and a half billion people believe it really happened, so there’s a reasonable chance it did. Before the Egyptians built the pyramids, and before the ancient Greeks or the Chinese had an advanced civilization – this story was told by a prodigy. Prodigies often become famous for clearly demonstrable skills – say, in music, dance, or mathematics. A prodigy in inner wisdom and insight may remain invisible to the world. It is said that there was a wise man who voluntarily had never said a word in his life. This was Jada. That name was not his given name. The meaning of Jada in the ancient tongue is dull and foolish. It was a name born of bullying and cruelty on the part of Jada’s half-brothers and their friends, and it stuck as if his real name. By the time most children start to speak, Jada’s understanding, insight, compassion, detachment, peace, and feeling of connection with all life had blossomed in ways rarely seen even in the great teachers and leaders in the world. He chose to become an absolute hermit to focus on inner meditation, but how was such a young hermit – merely a toddler – to join an order or retire to the caves of mountains? So, he became a hermit inside himself. He responded only enough to survive. His loving father tried until his death to educate his son, with no external success, though the boy learned all.

Of course, he did not appear particularly wise to anyone because he never spoke and barely appeared to hear or see. Nor did he make practically any effort to care for or maintain himself. After his father died when he was a teenager, he left his stepmother and half-brothers. He traveled and lived on whatever he could find or whatever he was given, without comment or complaint. Jada patiently bore even a murder attempt upon him, absorbed in his inner understanding. Perhaps, even though he was filled with compassion, he felt that the benefits of isolating himself from the world outweighed enlightening others. Many cloistered ascetics in numerous traditions have followed such lives. But, one day he broke his silence, and this story is the result.

Once, while Jada, strong in the prime of life, was walking along a main road, King R. Gana was traveling the same road in his palanquin. Near where Jada rested, the palanquin carriers also took a break. One of the four palanquin carriers suddenly complained of illness and left the king’s service to seek treatment. King Gana then pressed Jada into slavery as the replacement carrier. The wise man carried the king’s palanquin while trying to avoid stepping on insects and other creatures of the road, as was his habit. Needless to say, the king got a very shaky ride. The king then halted his carriers and came out of the palanquin to berate his newest palanquin carrier and to demand excellent service. No one knows why Jada decided at that point to speak for the first time in his life. But speak he did, and he told the king this story of merchants in a great forest. As soon as King Gana understood the story, he awakened to his inner nature and became a seeker of the essence of life. Jada’s story was passed orally through many generations, and was put into writing a few thousand years ago, as is noted in the written account.

Much later, in recent times – more recent than the wise man and the king, at any rate – another part of this story was put in writing. It was around the time European colonists were first coming to the Western Hemisphere. A wealthy government officer in India under Islamic rule voluntarily decided to live in poverty in the Sacred Garden, becoming somewhat a recluse in the more traditional way. Those who recognized his wisdom and holiness called him a name that in the ancient tongue means the servant who has mastered his mind and senses, or a servant leader as we say in modern times. In a short form, he can be called Das G. His story starts where Jada’s ends – with the determination to seek the essence of life – and tells of a journey through many obstacles, and with many helpers, to find that essence in a most personal way.

Here these two parts of the story find their rightful place together. But, the wise man who taught the king, and the government officer-turned-servant leader, never made it clear if the stories they told happened in a past distant to them, or within their own time, or would happen in the future. Perhaps these stories were not even from this planet. Therefore, we who hear this story today don’t know if the vehicles used in the story have animals or motors running them, or if the messages sent back and forth are carried in someone’s bags or via satellites. In this re-telling, readers may decide for themselves about such details. It could be – indeed it’s very likely – that this story happened long ago, is happening now, and will take place in some future time as well. Of course, the names and details would be different each time, but yet the most important parts of the story would still be the same.

*An excerpt of that book appeared in the Jan/Feb 2018 edition of Back to Godhead.