Though emperor of the world and a powerful warrior, Yudhishthira Maharaja displayed the character of a compassionate Vaishnava.

By His Divine Grace A. C. Bhaktivedanta Swami Prabhupada
Lecture given in Los Angeles on May 15, 1973.

After the Battle of Kurukshetra, Maharaja Yudhishthira’s lament was not limited to concern for the loss of human lives alone.

“Suta Goswami said: Being afraid for having killed so many subjects on the Battlefield of Kurukshetra, Maharaja Yudhishthira went to the scene of the massacre. There, Bhishmadeva was lying on a bed of arrows, about to pass away.” – Srimad-Bhagavatam 1.9.1 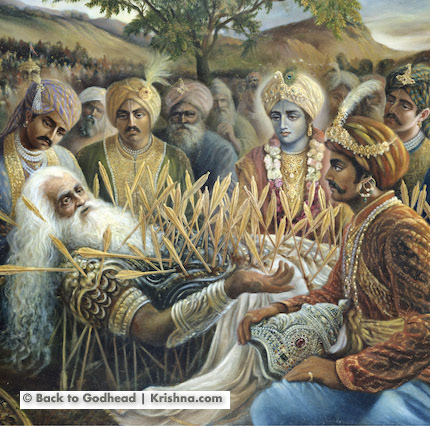 The most important point here is that King Yudhishthira was so responsible that he became afraid. “I have killed so many praja.” It is not said “human beings.” No. Praja. Pra means prakrishta-rupena, or “complete,” and ja means jayate, or “takes birth.” Every living entity takes birth somewhere. Consider nationalism. What is the meaning of “American nation” or “Indian nation”? The human being is the same in both places – two hands, two legs. And they eat. Everything is the same. Why the difference in nationality? Nationality is only there because that particular human being has taken birth in that particular land. That is called praja.

If an Indian girl has given birth to a child in America, the child becomes an American national because the child was born in America. So if this fact is to be accepted – that anyone who takes birth in the land of America becomes an American immediately, and the American government takes charge of his protection – why is this restricted to only the human child? If this is the definition – praja, “one who takes birth” – then the animals also take birth. The trees also take birth. So many other animals, other living entities, also take birth. So yes, therefore they are all prajas.

It is miserly to limit your praja conception, your national conception, to human society only. Expand it. Even if it is taken nationally, anyone who takes birth in this land is a national, whether human being or animal or tree or plant. That is the definition of praja. Prakrishta-rupena jayate: any living entity who has taken birth. In America there are so many jungles and trees. If an outsider like me comes and begins to cut the trees, will the American government tolerate that? Immediately I shall be prosecuted. I can say, “What is the harm? It is a tree that I am cutting.” “No, you cannot cut this tree, because it is on American land.”

Yudhishthira Maharaja is not only thinking of the human beings who were killed on the Battlefield of Kurukshetra. He is thinking of all the horses, elephants – because they are also living entities. They are also praja, nationals.

We don’t find the word “national” in the Vedic literature. It is a modern invention. But if we feel nationally, then we feel for every living entity who is born in that land. That is real Krishna consciousness, not the sectarian idea that “I feel for this living entity, not for that one.”

Iti bhitah. Yudhishthira Maharaja was very much afraid. “I have killed so many animals and men. So what to do?” Praja-drohat. Droha means to become an enemy. Unless you become my enemy, you cannot kill me, neither can I kill you. So when the prajas were killed, the king became their enemy. He is thinking, “Otherwise, how I could induce them to be killed?” He was thinking like that. Praja-drohat. If you rebel against the king it is a great fault; similarly, if the king rebels against the prajas, that is also a great fault. Therefore Yuldhishthira Maharaja is afraid. Bhitah praja-drohat. “Now what to do?”

Sarva-dharma-vivitsaya: “for understanding all acts of religion.” This is the way to approach a guru when you are bewildered, when things are not in order, when your brain is puzzled. Arjuna accepted Krishna as guru when he could not ascertain whether he shall fight or not. Bewilderment. So similarly, Yudhishthira Maharaja also became bewildered. “I have killed so many prajas. What is my position? I have become so sinful. How can I rule over the empire?”

When all these questions puzzled him, he decided to go to Bhishmadeva, who was lying on the bed of arrows before his death. As I told you, Bhishmadeva could not die as long he did not wish to. That was the benediction given by his father. “My dear boy, you have taken such a strong vow. So I give you a benediction.” Formerly everyone was so powerful. Of course, the father’s benediction is always there, but formerly they were actual benedictions. Everyone was so powerful.

The Need for a Guru

Those who were powerful could actually give benedictions. Yasya prasadad bhagavat-prasadah. As we read in the Gurvashtaka, “By the benediction of the spiritual master, one becomes benedicted by the Supreme Lord.”

When Yudhishthira Maharaja became puzzled, he went to Bhishmadeva. This is the process. One must approach a superior person, who is called a guru. Tad-vijñanartham sa gurum eva abhigachchet: “To understand these things properly one must humbly approach a spiritual master.” (Mundaka Upanishad 1.2.12)

Tad-vijñanartham sa gurum eva abhigachchet. Therefore the Vedic instruction is “Because you are confused, because you do not know which path to follow, you must approach a guru.” This word, abhigachchet, is used when something is compulsory: “You must.” You cannot say, “Without going to a guru I shall chalk out my own path.” No, that is not possible. Therefore this very word is used, gachchet. In Sanskrit all words are meaningful. Gacchet means it is a question of must, not that I may or may not.

Nowadays there are many rascals who come here to your country to preach that “There is no need of a guru. You can become your own guru.” That is not the Vedic injunction. The Vedic injunction is you must go to a guru in order to understand the transcendental science – tad-vijñanartham.

That is natural. When we are confused in our ordinary life, we go to a senior friend or experienced friend and ask him, “My dear friend, I am in this condition. I am very much confused about what to do.” That is natural. Similarly, when Yudhishthira Maharaja was so afraid that he had killed so many prajas, he knew, “Now, still, there is a superior person, my grandfather, who is lying on the bed of arrows. Let me go there.” Tato vinashanam pragat. He decided, “Let me go to Bhishmadeva. He can give me instruction.” What is that instruction? Sarva-dharma: instruction on all kinds of religious systems.

Dharma means occupational duty. Dharma does not mean a religious sentiment, as it is translated in English. “Animals have no soul.” This is not dharma. Without any scientific knowledge, if somebody says in some religion, for eating meat, “Animals have no soul; you can kill as many as you like,” that is not dharma. The real meaning of dharma is occupational duty, not sentiment.

Dharmam tu sakshad bhagavat-pranitam: “Real religious principles are enacted by the Supreme Personality of Godhead.” (Bhagavatam 6.3.19) It is just like state laws. The state laws are given by the state. You cannot manufacture laws. Similarly, dharma, which we call religion generally, cannot be manufactured by your concoction. Dharma is stated by the Supreme Lord. That is dharma.

Without Krishna consciousness, the philosophy of equality and fraternity as they profess in your country is not possible. Artificial. Without people coming to Krishna consciousness and understanding that every living entity is part and parcel of Krishna, or God, then equality, fraternity, universal brotherhood – big, big words – these are impossible. Therefore one has to become a learned scholar, panditah sama-darshinah. Then he will be able to see equally.

Maharaja Yudhishthira is thinking of all prajas. Otherwise, the language would have been “human being.” No. Praja. “All kinds of praja.” This is the universal understanding.

Hare Krishna. Thank you very much.