A Divinity Beyond Krishna?

A Divinity Beyond Krishna?

By Chaitanya Charana Dasa
When speaking of God in the Gita, Krishna sometimes seems to be referring to some entity different from Himself.
Krishna asks us to surrender to Him, but some Gita commentators say He actually means something else. 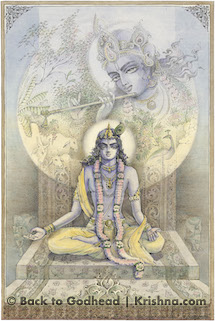 Some Bhagavad-gita interpreters claim that Krishna is just a medium for transmitting the wisdom coming from some higher, impersonal supreme entity. To support this, they point to Krishna’s third-person references in the Gita to some divinity apparently beyond Himself.

Before examining their claim, let’s consider a specific example of a third-person reference. In the eighteenth chapter, Krishna recommends working in a mood of worshiping that Supreme Person from whom everything comes and by whom everything is pervaded (18.46). A few verses later (18.54–58), Krishna refers to the Supreme in the first person (i.e,. as Himself)

Now, from three perspectives let’s analyze the claim about there being a divinity beyond Krishna.

First, the Gita contains many categorical statements wherein Krishna, referring to the Supreme in the first person, thus proclaims Himself to be the highest reality. Consider just a few such statements:

Second, even when the Gita refers to the Supreme in the third person, nowhere does it declare that divine entity to be the highest reality. To the contrary, such third-person references are frequently and quickly followed by a first-person reference to the highest reality, with the context usually indicating that the later references point to a higher spiritual understanding (eg., 15.17 is followed by 15.18; 18.62 by 18.66; 6.29 by 6.30). 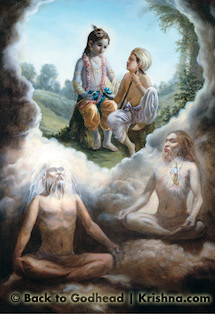 When using a third-person reference, might Krishna be referring to someone other than Himself? No, the attributes of the third-person divinity are said to be present in Krishna. Consider the attributes mentioned in 18.46. These are the same as what Krishna has earlier mentioned as His attributes. For example, he has declared that everything comes from Him (10.8) and is pervaded by Him (10.42) and that work is to be offered to Him (3.30 and 9.27).

Divinity As Conceived by Seekers

If Krishna is referring to Himself when speaking of the highest reality, then why might He sometimes use the third-person reference?

Karma-yogis don’t always have a clear conception of God; they are primarily concerned about staying detached and disentangled while working. Even if they start offering the fruits of their work to God, that needn’t immediately clarify their conception of Him. While discussing such karma-yogis, Krishna refers to Himself in the third person (18.46).

Krishna then outlines how karma-yogis evolve through jnana-yoga (18.49–53) to bhakti-yoga (18.54–55). After sketching this multipath progression toward liberation (18.41–55), Krishna delineates an alternative: bhakti-yoga as the single pathway to liberation from wherever we are presently (18.55–59). Bhakti-yogis know who their object of love is and why He is loveable. While discussing bhakti-yogis, Krishna refers to the Supreme in the first person (18.54–59).

Thus Krishna’s third-person and first-person references to the Supreme in particular sections could correlate with the conceptions of God of the seekers described in those sections.

An Evolving Understanding of Divinity

Another way to make sense of third-person references is by considering the triune conception of divinity provided by the Gaudiya Vaishnava tradition: Brahman, the all-pervading impersonal effulgence; Paramatma, the immanent manifestation who exists within all hearts and within the worlds; and Bhagavan, the all-attractive transcendental person who exists in the spiritual world.

These three aspects are the same in that they are manifestations of the same one ultimate reality. And they are different in that each exists simultaneously and distinctly. This conception of inconceivable oneness and difference or unity and diversity can help in understanding Krishna’s third-person references to the Supreme.

Consider the fifteenth chapter (15.17–18). Krishna uses the third person for God who has entered the universe (15.17) and the first person for Purushottama, the Lord in the heart (15.18). Consider how He describes the vision of the yogis as they progress toward the highest realization (6.29–30). He uses the third person when their realization is at the Paramatma level (6.29) and the first person when their realization has risen to the Bhagavan level (6.30).

Consider also the Gita’s riveting conclusion. Krishna uses the third person for the indwelling Supersoul (18.61) who is the object of surrender (18.62). But when Krishna sees Arjuna lost in thought, unable to decide, His affection for Arjuna increases and floods His heart (18.64). He stops speaking as the dispassionate observer (Paramatma) and starts speaking as the impassioned lover (Bhagavan). Naturally, He adopts the first-person reference in the final call for surrender that is the devotional crescendo of The Song of God (18.66).

Krishna’s Complementing His call for “Surrender” with “Go,” Not “Come”

Some Gita interpreters highlight the word vraja in the Bhagavad-gita’s concluding verse (18.66), emphasizing that its literal meaning is “go,” not “come.” That Krishna wants Arjuna to surrender and go, not come, means that surrender is meant to be directed toward some divinity other than Krishna. Or so they claim.

It’s true that vraja often means “go,” but it also generically means “walk.” The earthly replica of Krishna’s pastoral paradise of Vrindavana in the spiritual world is referred to in short as Vraja; it is a place where everyone is walking or active. And the Gita itself uses a variant of vraja in this generic sense of motion (2.54, vrajeta): Arjuna inquires how the self-realized move about in the world. And this generic meaning of vraja gels well with the Gita’s vision of surrender: a surrendered Arjuna is to actively do the will of God in the world, not passively meditate on God by retreating from the world.

This world-engaging sense of “go” is not just acceptable, but quite sensible in the Gita’s physical setting. For learning the Gita, Arjuna has turned away from the battlefield toward Krishna; for living the Gita, a surrendered Arjuna needs to turn back toward the battlefield and therein do Krishna’s will. And that indeed is what Arjuna says he will do (18.73) – and what he does, as revealed in the Mahabharata’s description of the subsequent Kurukshetra war.

Thus, when Krishna urges Arjuna to “surrender and go,” the “go” doesn’t imply that the object of surrender is some divinity other than Krishna; it implies that the mode of surrender is active and engaged in the world, not passive and turned away from the world.

How Arjuna in the Gita Is Much More Than a Student

Another way to understand the Gita’s teachings is to look at how Arjuna understood the Gita. To appreciate why Arjuna’s understanding is so important, consider a metaphor.

Arjuna’s words in the Gita are similarly significant. Given that the Gita is a discussion between him and Krishna – a discussion that has been interpreted in many differing, even opposing ways – his words are crucial clues to its correct understanding. Consider, for example, Arjuna’s declaration that Krishna is the highest reality (10.12–15). Krishna doesn’t interrupt or correct him. When Arjuna follows up this declaration with a request to hear more about Krishna’s glories (10.16–18), Krishna doesn’t chide him for wandering off to a minor or tangential subject. Instead, Krishna expresses His pleasure, as indicated by His use of hanta (10.19), which is often an exclamation, an expression of wonder. In this verse’s context, hanta broadly means, “Yes, certainly! I will speak with pleasure.”

Even for those who don’t consider Arjuna an authority on spiritual subjects, his words in the Gita can still be robust indicators of its core meaning. Why? Because his words are spoken in the presence of the supreme authority, the person who knows the Gita’s message the best, the person who is the source of that message: Krishna Himself.

In the Bhagavad-gita’s narrative structure, Arjuna is not just a student; he is also a reliable pointer to its central message.

How Can We Know Arjuna’s Understanding of Krishna’s Position?

To know Arjuna’s understanding, we need to look at his words in the Gita. Arjuna’s words fall in four categories:

* Questions, which he asks throughout the Gita

Among these, the first two categories mostly contain brief statements. Skeptics who claim that Krishna is different from the ultimate divinity may downplay the prayers by arguing that they describe the universal form, not Krishna. Actually, it is Krishna’s universal form – by His will He reveals it and He conceals it; therefore the attributes of the universal form are ultimately Krishna’s attributes. Nonetheless, let’s focus on the declarative statements Arjuna speaks while facing Krishna and addressing Him in an unambiguous second person.

First (10.12), Arjuna uses ten describers to assert that Krishna is the ultimate reality. Supporting his assertion (10.13), he refers to the testimony of several sages from whom he has heard as well as Krishna’s self-testimony in the Gita. Thereafter (10.14) he proclaims that he accepts all of Krishna’s words, while acknowledging that Krishna’s personality can’t be understood even by the gods (devas) and the anti-gods (asuras). Concluding his declarative statements (10.15), Arjuna states that Krishna alone knows His own glories, and he reasserts Krishna’s supreme position by using five divine epithets.

Nothing in any of these words suggests that Arjuna considers the highest reality to be anything other than Krishna. Arjuna does acknowledge the difficulty in understanding how Krishna, the seemingly finite person standing next to him, can be the supreme divinity. But by stating that this difficulty confronts even celestial beings, he indicates that the difficulty is universal: it arises when the finite strives to understand the infinite; it doesn’t in any way justify the claim that the infinite is anything other than Krishna.

How Arjuna’s Words Reveal the Gita’s Sadhana and Sadhya

One traditional way to know the import of a complex text is the path-purpose hermeneutic, or the sadhana-sadhya approach. Sadhana refers broadly to the means or the path, and sadhya refers to the end or the purpose. Thus, to know the essence of a complex text, we can focus on what it says about sadhana and sadhya.

This approach is especially relevant for the Gita because it was spoken to a specific person, Arjuna. What Arjuna spoke and did on hearing the Gita can reveal his understanding of the Gita’s sadhana and sadhya. Though the Gita talks about multiple sadhanas and sadhyas, what Arjuna speaks and does with Krishna’s approval can be said to be Krishna’s highest recommendation and the Gita’s essence.

To know Arjuna’s understanding of sadhya, let’s look at his declarative statements in the Gita. These occur primarily in the middle of the Gita, in its tenth chapter (10.12–15). In each of these verses, Arjuna unequivocally asserts Krishna’s supreme position, beginning with eight signifiers of God (10.12) and ending with five (10.15).

To know Arjuna’s understanding of sadhya, let’s look at his concluding statement, a solitary verse that ends with a resolve: I will do Your will (18.73, karishye vacanam tava). Does Arjuna’s resolve convey simply a generic obedience to an authority? No, because first, the verse itself refers to Krishna with a epithet signifying God: Acyuta; and second, the verse is preceded by emphatic calls for the practice of bhakti (18.65–66). Thus Arjuna’s resolve signifies his harmonization with the supreme will, which is the essence of bhakti.

Can we be sure that Krishna approved Arjuna’s understanding? Yes, because Krishna didn’t correct Arjuna in any way. Far from correcting, Krishna stayed vigilantly with Arjuna after the Gita ended and assisted him repeatedly during the Kurukshetra war. Thus Arjuna’s words in the Gita reveal Krishna to be the sadhya and krishna-bhakti to be the sadhana.

Chaitanya Charana Dasa serves full time at ISKCON Chowpatty, Mumbai. He is a BTG associate editor and the author of twenty-five books. He has two websites: gitadaily.com and thespiritualscientist.com (the source for BTG’s “Q&A”).